Porsche has won countless races around the Nurburgring in its history, and now it’s just added another victory by taking back the lap record for an all-electric production car with the Taycan Turbo S.

“We’re delighted that the Nürburgring record for electric cars is back in Porsche hands,” said Kevin Giek, Vice President of the Taycan model range. “This lap time not only shows how much potential lies in our new performance kit, but also confirms once again the sports car genes of the Taycan.” 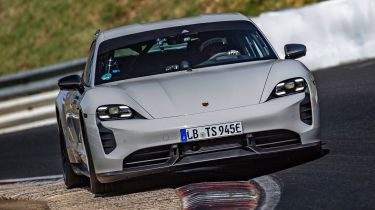 The Taycan was equipped with 21-inch RS-Spyder design wheels and road-legal Pirelli P Zero Corsa tyres. A new Porsche Dynamic Chassis Control (PDCC) is fitted to the car to maximise the extra grip afforded by the new tyres, so far this system is only available in the German market. Aside from the required roll cage and racing seats, it was an entirely standard production vehicle. The car also weighed the same as production Taycan and the powertrain was also unchanged with 617bhp available.

“In the past, only thoroughbred super sports cars got into the 7:33 range,” said Lars Kern. “With the new performance kit I was able to push even harder, and the car was even more precise and agile to boot.”

The Taycan Turbo S is still some way off the fastest electric car time however with the blisteringly quick Volkswagen ID.R managing a time of six minutes 5.3 seconds in 2019.