Singer has just revealed its newest creation, a convertible version of the brand’s Turbo Study. The California-based firm is arguably the definitive restomod company for classic 911s and has made Targa restorations in the past, this 964-based homage to the 930 Turbo Cabriolet is the first complete drop-top from Singer.

Earlier this year we saw the first turbocharged Singer, the Turbo Study, which is also based on the 964 generation of 911 but with clear visual nods to the 930. Just in case you were wondering, Singer states that it does not sell or manufacture cars and steers well clear of giving its cars the ‘911’ nomenclature. The 964 was produced between 1989 and 1993 and is Singer’s preferred 911 for restorations.

As for the latest Turbo Study, it offers the craftsmanship and exquisite detailing we’ve come to expect from Singer, starting with the engine. It’s a “Mezger” (much-loved by Porsche enthusiasts) air-cooled flat-six in 3.8-litre form. Twin turbochargers are added, and as a response to owner feedback Singer has bumped up the power to a maximum offering of 510bhp, but says that “the study enables power outputs starting at 444bhp rising to 503bhp.”

No matter the output, his is sent through a six-speed manual transmission to the rear wheels, but Singer says all-wheel drive versions will be available. 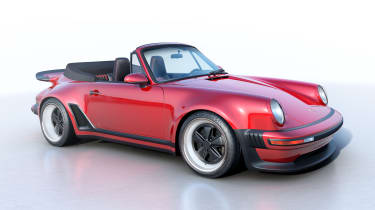 The body may look identical to the 930 if you’re not a Porsche fanatic, but it’s a bespoke design. Much of it is made from carbon fibre to increase rigidity and reduce weight. The ‘shark fins’ in front of the rear wheels have been repurposed into intakes, which supply cold air to the engine bay for extra cooling. At the back, a huge spoiler reminiscent of the 930’s wing works in conjunction with the large lip spoiler on the front bumper.

Singer has also revised the suspension and says refinement is “enhanced” with “reduced noise levels”, suggesting the convertible Turbo Study is more focused on touring qualities than previous Singers.

However, customers can still specify a sports exhaust system and revised suspension damping. The more powerful turbo-specific brakes can be upgraded with carbon-ceramic discs.

Considering the interior will be on show for everyone with the top down, Singer has worked its magic by giving it electrically adjustable sports seats, trimmed in black with Tartan seat centres, and wood accents in red. Unlike the original 930 or even the newer 964, the fabric hood is automatic. Wireless phone charging and air-conditioning are also fitted as standard.

What about Porsche’s homage to the classic 911? Check out our review of the 911 Sport Classic here…