Convertible electric cars are still somewhat of a rarity, but Polestar has revealed it will become one of a small number of brands to offer such a vehicle. It has confirmed that a production version of its O2 concept will arrive in 2026 wearing the Polestar 6 badge.

It will be Polestar’s foil for the awaited second-generation Tesla Roadster.  That car was revealed as a prototype in 2017, but has yet to materialise in production form. However, there’s still a four-year wait until Polestar’s drop-top EV arrives, so the race is on to see which car gets to customers first.

Confirmation that the O2 concept will become a road-going car isn’t too surprising, given that Polestar CEO Thomas Ingenlath spoke openly of the possibility at the car’s unveiling. Until now, Polestar has spoken only of three further models beyond the 2 hatchback: the 3 and 4 (both SUVs) and the 5 saloon, due in 2024.

The 4.7-metre-long 6 will use an adapted version of the 5’s platform when it arrives, with a shortened wheelbase but still seating four in a 2+2 configuration, plus a folding hard-top roof. There’s a UK engineering angle to the platform as well, with key R&D work for the architecture taking place at a Polestar UK base located at the MIRA proving ground in Warwickshire.

The brand has confirmed some targeted performance figures aligning with the possible maximum performance of the 800V platform. Up to 872bhp and 900Nm from a dual-motor set-up has been teased, along with an aim of 0-62mph in 3.2 seconds and a top speed of 155mph.

No range has been quoted, but with just over 300 miles suggested by Ingenlath for the 5, expect a similar figure for the 6. Prices haven’t been revealed, but Auto Express understands that the 6’s supercar performance will command supercar money – expect  to pay anywhere around £165,000.

Build slots for the launch version of the car can be reserved now for $25,000 (roughly £20,000). This will consist of a production run of 500 models, called LA Concept Edition. Each will be finished in the same sky blue paint as the O2 concept, with light leather interior and the same 21-inch alloy wheels. 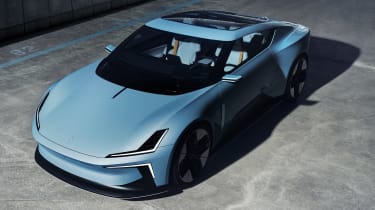 For the concept, Polestar’s engineers modified the 5’s platform by removing the ‘foot garages’ – in effect, the holes in the battery floor used on that car to provide rear footwells. This means the O2’s wheelbase is 400mm shorter than that of the 5.

Ingenlath told us that the O2’s dramatic styling – which includes a deeply scalloped bonnet and pronounced, squared-off haunches over the rear wheels, is “realistic”. “Our concept cars have the spirit of being tangible,” he said. “From a packaging perspective, and how it is constructed, it is possible to put a car like the O2 into production.

Polestar’s chief designer, Max Missoni, said that a fixed-roof version of the O2 is something that could be envisaged. But Ingenlath said there is “real appeal” in the idea of a zero-emissions convertible. “I feel that this type of car, so far, is a great missed opportunity,” he said. “It’s bizarre to think that a sports car has to have a combustion engine; the greatness of propulsion that comes with the electric drivetrain is amazing for a sports car.

“Then to do that with the open-roof concept, where everybody dreams of the fresh air, the breeze, of being closer to nature – it’s a perfect fit to have an electric drivetrain in such a car. Not only would you have fresh air when you arrive at it, but you would also leave fresh air for the people behind you – not poisoning them with the exhaust from your car.”

The O2 concept car features a typically neat Polestar interior, with clean lines, few buttons and a sizeable portrait-layout infotainment system that ‘floats’ in front of the dashboard. The most concept-like feature is a drone, which can be stored behind the rear seats and take off even when the car is moving. It can be controlled using the central display and follow the car at speeds of up to 56mph, either maintaining focus on the driver’s face or moving further away for a more panoramic view.

The car also features next-generation sustainable materials which are “not quite ready for industrialisation just yet”, according to Ingenlath. They include the use of recycled polyester as the single material in all soft components, reducing the complexity of manufacturing but also making the vehicle more straightforward to recycle.