Production of the Mercedes-AMG One – Merc’s hugely complex F1 engine-powered car for the road – is now underway, and the German car maker has confirmed that the vehicle will be assembled in Coventry, UK, while its engine will be built in Brixworth. First deliveries of the One are expected before the end of the year.

While all AMG engines are built by hand, the AMG One goes a step further – the whole car is hand-assembled as it travels down a production line consisting of 16 assembly and testing stations. That covers everything from a monsoon rain test to dyno runs and a visual inspection.

According to Mercedes, the process mirrors the production of an expensive watch, with some components being assembled and tested before being disassembled again ready to be fitted to the car. To give you an idea of how labour-intensive the process is, the Mercedes-AMG One’s body is bolted together so it can be checked for fit and finish. Once that’s complete, the whole lot is then taken apart again so that individual components can be hand painted.

Every part of the car’s powertrain – the 1.6-litre V6 turbo engine, high-voltage battery and four electric motors – is hot tested before the complete unit is assembled. It’s a similar process to the one followed for the firm’s F1 engines.

Unlike an F1 car, though, the One hypercar also has to go through the same mundane tests as your A-Class hatchback – it’s got to withstand a simulated monsoon rain storm with no leaks, be fine-tuned for NVH and then complete a final inspection before it’s cleared for sale. It takes more than 50 specialists to get to this stage.

Best job on staff? Test driver – because each AMG One must complete an on-track shakedown before it’s cleared to leave the factory.

After a difficult development period, Mercedes-AMG finally unveiled the production-ready version of its One hypercar, powered by an F1-derived hybrid powertrain that produces a total of 1,048bhp. If you have to ask, prices start from £2.5million.

The Mercedes-AMG One is powered by a 1.6-litre turbocharged V6 engine derived from Mercedes’ F1 powertrain tech. The development process has seen the road car side of the firm collaborate heavily with the race team’s High Performance Powertrains division based in Brixworth in the UK.

Mercedes’ 1.6-litre V6 drives the rear axle through a seven-speed automated manual gearbox developed specifically for the One. It’s combined with an 8.4kWh battery – cooled directly and focused on performance – which feeds no less than four electric motors. These motors deliver four-wheel drive and a 0-62mph time of 2.9 seconds. Top speed stands at 218mph.

The battery features an onboard 3.7kW charger, meaning it should take around two hours and 20 minutes to charge. It also harvests energy from the electric motors when the car is braking, plus the combustion unit can be used to top up power on the move.

The petrol unit produces 566bhp and revs to 11,000rpm; it’s supported by an ‘MGU-K’ (an F1 term for an electric motor) on the engine’s crankshaft that delivers 161bhp, while a pair of Motor Generator Units on the front axle deliver a combined 322bhp. The final electric motor is an MGU-H which acts as an electronically driven turbocharger to improve throttle response.

AMG’s Performance 4MATIC+ all-wheel drive system is fully variable and the AMG One can be driven in pure-electric mode for up to 11 miles.

The One’s chassis tech is as advanced as its powertrain, with a carbon fibre monocoque that uses the engine and gearbox as a stressed chassis member, just like in F1. It’s clothed in carbon fibre body panels, which helps keep the car’s weight down to 1,695kg, while the suspension uses a five-link pushrod set-up at both the front and the rear.

Adaptive dampers offer three settings – Comfort, Sport and Sport+ – while the ESP has three stages of operation too: Highway, Sport Handling Mode (which allows more slip for sportier driving) and Off.

Alongside adaptive suspension, the AMG One also offers different modes for its active aerodynamics. These include Highway, which closes the wheel arch louvres, stalls the active flaps on the front diffuser and fixes the rear wing in its retracted position. 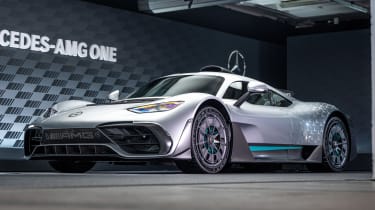 Track mode opens the louvres, extending the front diffuser and rear wing flap for maximum downforce. It actually increases this by up to five times compared with Highway mode. Finally, Race DRS mode can be activated at the touch of a button, just like in an F1 car, reducing drag and downforce (by around 20 per cent, according to Mercedes) to boost top speed on long straights.

For yet more driving experience personalisation, there are six drive modes. Race Safe is the default mode that sees the powertrain work as a hybrid, prioritising electric drive on start-up.

Next up is Race, which features a special charging strategy. Mercedes says that in this setting “the combustion engine runs continuously and can charge the high-voltage battery more so that full electric power is always available.”

EV mode does what you expect, restricting the powertrain to electric power only, while Race Plus brings the car’s active aerodynamics and suspension into play, lowering the ride height by 37mm at the front and 30mm at the rear to improve downforce. It also firms up the adaptive dampers and loads up a different, more track-focused calibration for the chassis systems.

Strat 2 dials up the maximum output from the powertrain as per qualifying mode in F1, plus it firms up the dampers even further. Finally, Individual mode allows drivers to tune the different settings applicable to the road modes, fine tuning the car’s set-up for the street.

According to Philipp Schiemer, Chairman of the Board of Management of Mercedes-AMG GmbH “With the Mercedes-AMG ONE, we have more than pushed the envelope. The immense technical challenges of making a modern Formula 1 powertrain suitable for everyday road use have undoubtedly pushed us to our limits. Over the duration of the development period, many may have thought that the project would be impossible to implement. Nevertheless, the teams in Affalterbach and the UK never gave up and believed in themselves.”

Jochen Hermann, Technical Managing Director of Mercedes-AMG GmbH, added, “The Mercedes-AMG and Mercedes-AMG High Performance Powertrains teams have really done a great job here. This project was partly a curse and a blessing at the same time. But we have walked the stony path, and as a technician you naturally get carried away with all the details. From the materials used, the exceptional chassis components to the aerodynamic refinements – in terms of complexity, the Mercedes-AMG ONE is hard to beat. In a Formula 1 car, a team of engineers with laptops makes sure that the powertrain starts. With our hypercar, all it takes is the push of a button.”

The inside of the AMG One is just as racy as its exterior, which features styling cues such as a large fin on the engine cover and tail-lights that echo the Mercedes three-pointed star emblem. Much of the body work is also in exposed carbon fibre.

This theme continues inside, with fixed-back AMG motorsport seats that offer two positions. The first has a backrest angle of 25 degrees, while the second is more reclined, at 30 degrees. The steering wheel is electrically adjustable, while the pedals are moved mechanically and offer 11 different positions.

It’s a sparse two-seat cabin, with the focus clearly placed on the driver. Mercedes says “The centre tunnel is also a functional part of the carbon-fibre support structure” while the dash has been designed in a slim wing profile to help visibility on track.

It features two 10-inch displays – one for the infotainment and one for the driver – with bespoke AMG One graphics. There is more carbon fibre for the door panels, again helping to keep the kerbweight down, while the AMG One’s steering wheel has been inspired by an F1 car and features shift lights on the top of the rim, as well as many different buttons and knobs to adjust the car’s various drive modes and functions. The rear-view mirror has also been replaced by a screen due to the complex powertrain and opaque engine cover.

Motorsport-derived materials feature around the interior, including microfibre cloth, while AMG says that “Customers also have extensive options for very personal individualisation, which can be specified in close consultation with the experts at Mercedes-AMG.” But expect the price to rise further if you take up this option.

Mercedes will build just 275 cars as part of the AMG One’s limited production run, with prices expected to be in the region of £2.5million.