Back in May, Audi unveiled Competition versions of its RS 4 Avant and RS 5, but now it looks like we’ll only get the former here in the UK. The good news however is that numbers will be bumped up from the initial 50 to 75. Customers will be able to order theirs from early September and first deliveries will start at the beginning of 2023.

The RS 4 Competition uses the same 2.9-litre twin-turbocharged V6 engine as the standard car, producing 444bhp and 600Nm of torque. Despite this, Audi has managed to increase the top speed from the delimited 174mph to 180mph. Acceleration has also improved the 0-62mph time, dropping from 4.1 to 3.9 seconds. Audi says it’s updated the software in the transmission control unit, creating “shorter shift times and enhanced acceleration”.

You should also be able to hear the V6 powertrain better too, with eight kilograms of sound deadening removed from the car and the addition of the ‘RS Sports Exhaust System Plus’.

The Competition’s dynamics have been thoroughly looked at, as the car receives Audi’s ‘RS Sport Suspension Pro’ chassis. It means the car sits 10mm lower than the standard car and thanks to manual adjustment, a further 10mm drop is possible. A higher spring rate, three-way adjustable dampers, and stiffer anti-roll bars should all help the Competition improve on the RS 4’s cornering characteristics. Audi also says greater focus has been placed on the behaviour of the rear axle, especially in “dynamic” mode. 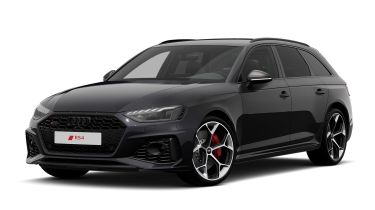 To differentiate the Competition from the lesser RS 4 models, Audi has given its some visual upgrades. Every model will come in Sebring Crystal Black paint as a nod to the 10th anniversary of the German firm’s win at the inaugural World Endurance Championship at Sebring in 2012.

As you’d expect, there are RS Sports seats inside, and they’re shod in Dinamica honeycomb upholstery – exclusive to the Competition model. Red stitching on the RS floor mats, centre console, armrests and the flat-bottomed Alcantra steering wheel also set the Competition model apart from the regular RS 4 Avant.

Elsewhere, equipment levels have been improved with the use of a Bang & Olufsen 3D Sound System, a 360-degree camera and Audi’s multi-coloured LED interior lighting pack.