The new Alfa Romeo Tonale is now on sale in the UK, with prices starting from £38,595. Three trim levels have been confirmed, and a plug-in hybrid will follow later this year. All versions also come with their own NFT digital certificate – a service record that Alfa claims will help residuals.

The range kicks off with limited run Speciale cars, which start at £38,595 and will only be on sale for a limited time period. The kit list is shared with range-topping Veloce trim, but swaps the 19-inch wheels for 20s and adds unique ‘Speciale’ badging, and comes on a passive steel-sprung suspension setup instead of the Veloce’s adaptive dampers.

Veloce models start from £42,495. Along with a sporty body kit, they have 19-inch wheels hiding powerful Brembo brake callipers and come fitted as standard with dual-stage adaptive suspension that’s firm when you want it to be and cosseting when you don’t. The sporty theme carries through to the inside where you’ll find black and red Alcantara upholstery.

But the entry-level point for the range (once Speciale is sold out) will be Ti, from £39,995. This model comes with 18-inch alloy wheels and a gloss-black body kit to the outside, while inside you’ll find aluminium pedals and gear shift paddles, a leather-trimmed steering wheel, four-way lumbar adjustment for the driver’s seat and a rear bench that splits 60:40.

You can have your Tonale in one of six colours – Alfa White, Alfa Red, Alfa Black, Misano Blue, Montreal Green and Vesuvio Grey – and a leather interior is optional. For now, all models come fitted with a mild-hybrid 158bhp 1.5-litre petrol engine mated to a seven-speed dual-clutch gearbox.

Keep reading for more information on the Tonale, including details on the plug-in hybrid model that’ll follow shortly.

After an initial delay due to Alfa’’s new CEO stating the car needed extra development, the wraps were taken off the Alfa Romeo Tonale compact SUV. In a first for the Italian brand, it will be available with plug-in hybrid power when it goes on sale in April, three years on from its concept debut.

In Europe the Tonale will also be available with more affordable hybrid tech, while the brand has placed a big focus on improving quality, infotainment and connectivity, and the plug-in hybrid model’s performance – all areas for improvement identified by Alfa boss Jean-Philippe Imparato after he joined the brand in March 2021.

Key to the Tonale – and Alfa Romeo’s hopes of success – is the car’s new plug-in hybrid powertrain. It comprises a 1.3-litre turbocharged four-cylinder petrol engine which is shared with Stellantis sister brand Jeep, and is joined by a six-speed automatic gearbox. The electrified element is made up of a 15.5kWh battery with a rear-mounted e-motor for a total output of 271bhp.

The system puts the four-wheel-drive Tonale Plug-in Hybrid Q4’s total kerbweight at around 1,900kg, and makes it the fastest variant in the line-up, with a 0-62mph time of 6.2 seconds. The battery takes two and a half hours to charge using a 7.4kW home wallbox, and from a full charge Alfa claims an all-electric range of up to 37 miles.

The PHEV option will be joined by a pair of front-wheel-drive 1.5-litre turbo petrol hybrid units that use a 48-volt electronic architecture. The 130 Hybrid offers 128bhp, while the 160 Hybrid gains variable turbine geometry tech for its compressor, increasing power to 158bhp.

Both engines are joined by a seven-speed dual-clutch automatic gearbox (there’s no manual option) and feature a 20bhp/55Nm electric motor that can propel the car at low speeds. For example, “e-Creeping” allows the Tonale to move slowly in EV mode, while the “e-Queueing” function can keep the car moving in a “stop and go pattern” in traffic. Low-speed parking manoeuvres can also be performed on electric power.

Under the striking skin, and despite now being part of the Stellantis Group, the Tonale is based on a heavily evolved Fiat-Chrysler platform that also underpins some Jeeps, albeit with a wider track for the Alfa.

The Tonale features MacPherson strut suspension all round, with Frequency Selective Dampers (FSDs) as standard, while adaptive dampers will be available as an option. The FSDs change their damping characteristics depending on inputs from the suspension system, and are claimed to deliver a comfortable ride when it’s wanted, while controlling body roll to boost handling for more engaging cornering. 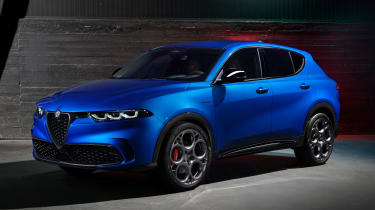 Engineers say the Tonale’s steering is the most direct in the segment, while the regenerative braking system features brake-by-wire technology and four-piston front brake calipers by Brembo.

There are more connected services, too, while the Italian brand has also developed NFT tech, making the Tonale the first car to integrate blockchain technology. This will become a digital record of the car’s main life events, including servicing and any over-the-air software updates. Alfa claims it will help preserve residual values.

Keeping pace with the segment, the Tonale features Level 2 autonomous driver assistance. Adaptive cruise control will keep the car in its lane on the motorway, plus autonomous braking with pedestrian and cyclist detection, drowsy driver detection, blind spot and rear-cross traffic monitoring, and a 360-degree camera are all available.

Q: Can the platform accept fully electric powertrains? If so, could we see a Tonale EV in the future?

Q: What about a high-performance Quadrifoglio halo model? Is this also a possibility for the Tonale?

A: “Yes, we have the capability to do that as well, in terms of power, platform, suspension and steering – we are ready at a level that would easily make this possible. Again, we will see the market evolution. This segment is a peculiar one; it’s sort of rational compared with a larger SUV, so we will see if there is a demand for that [a Quadrifoglio performance model] at the global level and depending on that, we will introduce or not the Quadrifoglio version.”

Q: What will make this a true Alfa Romeo to drive?

A: “The DNA selector really changes the character. In Dynamic we maximise the electrification for maximum performance. We change the stability control and steering behaviour and we use dynamic torque vectoring to deliver dynamics you’d expect from any Alfa Romeo.”

Q: Are there any key elements of the Tonale’s design we’ll see on future Alfa Romeos?

A: “Maybe yes, maybe no… We don’t have a cliché for Alfa Romeo. We can continue, or we can change. We want to continue the diversity of style from our past and maintain this in the future. We can even do something more extreme. We have freedom.”

What will the new Alfa Romeo Tonale have to beat? Check out our list of the best small SUVs right here…