‘I’ve been a magnet for poor service from car dealers’

Let’s face it, the way we buy cars has hardly changed for generations. Okay, we’re doing more and more research online and some people are even clicking the button and buying digitally. But in most cases it’s the good old-fashioned dealer who does most of the selling and dealing with customers. That’s about to change, though.

In the battle to reduce costs, improve satisfaction and be the owner of customers’ data, many manufacturers are changing their relationships with dealers. In short, you’ll do the deal digitally with the car maker, while existing dealers become more like demonstration and delivery centres. Dealers will also take care of after-sales, but even the value of your part-ex and your finance package are likely to be determined by the manufacturer.

It’s called an agency model, where the dealers as we know them will have an agency agreement rather than be franchise holders. So will it be a change for the better?

I hope so, since I seem to be a magnet for poor service. Just last weekend I was in a Lexus dealership where, after my wife and I were left sitting in an office while the sales manager and salesman discussed us in another room, I wasn’t given a finance quote unless I committed to buy. 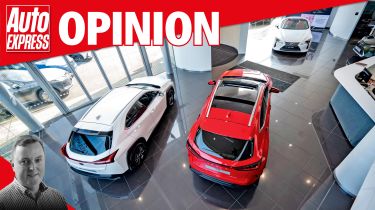 They later apologised, cited “miscommunication” and said it wasn’t their normal practice. As did the Toyota dealership I visited with my father a few weeks earlier after booking an appointment, only to find nobody at all in the showroom to talk to. Maybe I’m just unlucky…

Suzuki boss Dale Wyatt doesn’t believe in the new agency model, though. Speaking to him this week, he’s fiercely protective of his dealers – many of them highly rated, traditional, family-run businesses.

Wyatt’s desire for Suzuki to be number one in the car business for trust is built around his dealer network and its relationships with customers. Time will tell if that or the agency model is the best route, but all I know from my recent experience is that a good dealer can be hard to find.

Click here to find out our 2022 Used Car Awards winners….