Pictures of the new Smart Brabus #1 performance EV have been revealed on Chinese social media. And a full reveal is not far off, Smart confirming that the covers will come off its new hot small electric SUV on 26 August.

The Brabus-fettled model gets go-faster add-ons like unique front and rear bumpers, side skirts and cooling vents in the bonnet for the car’s front-mounted electric motor. There’s also a large roof-mounted spoiler, bigger alloy wheels and plenty of red exterior highlights.

The same red highlights are found on the inside, along with what looks like more heavily bolstered sports seats. You can also expect the infotainment system to offer performance-related modes – like a lap timer – in line with the Brabus #1’s sporting ambitions. That said, the Brabus will get the same 12.3-inch digital instrument binnacle and 9.2-inch centre screen as found in the standard car. 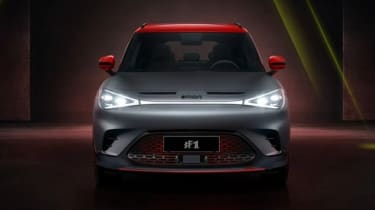 It is expected to use a dual-motor drivetrain setup, with one motor on the front axle and the other on the back. Power of around 400bhp has been rumoured in Chinese automotive media. That should get it from 0-62mph in around five seconds, although its top speed will be pegged back to preserve battery power. By comparison, the larger, 295bhp Volkswagen ID.4 GTX gets from 0-62mph in 6.2 seconds and is limited to 112mph.

If a recent teaser video is anything to go by, you can also expect the Smart Brabus #1 to generate a uniquely sporty electrical noise under acceleration, while tweaked suspension should make it a tidy handler in corners.

The standard Smart #1 goes on sale at the end of the year priced from £32,000, you can expect the Brabus model to cost significantly more when it goes on sale in the months following.

Now read about our preview ride in the Smart #1…