The fastest BMW i4 you can currently buy is the M50, with a whopping 537bhp and 795Nm produced by two electric motors. It only went on sale this year but BMW is already looking at a more extreme four-motor version and this is our first look at it.

2022 is BMW M’s 50th anniversary and the company has been celebrating by launching hot new variants of both of its internal-combustion engined M cars (like the long-awaited M3 Touring and M4 CSL) and electric cars (like the i4 M50 and iX M60). What we weren’t expecting was an faster model sitting above the i4 M50.

From this single image we can already see plenty of the new car’s design. At the front, the grille and bumper seem to have been taken from the M3 and M4 with an open grille rather than the blanked off area the i4 features. Within the grille itself the slats are reminiscent of the new M4 CSL. The aggressive surfacing beside the BMW badge also has been taken from the petrol-powered M cars. BMW says the car’s “wide wheel arches permit the integration of specifically manufactured high-performance front and rear axle designs”. The test car is also still referred to as a four-door coupe.

Beneath the new body lies a four-wheel drive xDrive system with an electric motor on each wheel. BMW says this “opens up completely new possibilities for infinitely variable, extremely precise and at the same time very fast distribution of drive torque”. In other words, you can expect the new car’s chassis to be extremely dynamic and highly adjustable. 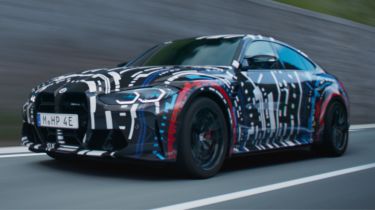 Dirk Häcker, Head of Development at BMW’s M division says, “Electrification opens up completely new degrees of freedom. We can already see that we can exploit this potential to the maximum, so that our high-performance sports cars will continue to offer the M-typical and incomparable combination of dynamics, agility and precision in the locally emission-free future.”

The current i4 M50 uses a 80.7kWh battery pack but we could potentially see this new car use the 105.6 kWh battery found in larger BMW EVs such as the i7 and iX, which would help counter the extra electrical consumption of the motors. BMW does say all four motors will be able to recoup energy from braking, sending electric back to the battery. However, it’ll likely struggle to match M50’s range of 318 miles.

The i7 and i4 both use variants of the CLAR modular platform where the iX has received its own bespoke architecture. It’s unclear which the new car will be based on.

Having said that, we expect an improvement on the M50’s performance, undercutting its 0-62mph time of 3.9 seconds.

Now read our full in-depth review of the BMW i4…