The 100 million men, I call them. That’s because the duo – Tim Shaw and Fuzz Townshend, who co-present television series Car SOS – have roughly that many viewers across the globe.

Sadly, this is the era when many slick, pretty, ‘celebrity’ presenters front programmes about all manner of specialist subjects they know nothing about. So it’s refreshing to see a pair of proper, rough-around-the-edges, not-so-pretty car blokes (both with strong engineering backgrounds) hosting and getting their hands dirty on a real-world show about real-world cars, people and emotions.

As for the unapproachable celeb status they should’ve stooped to by now, they just don’t have the time for that rubbish. This was demonstrated at the start of The British Motor Show last August when they stood in the main lobby from early morning to shake the hands of thousands of showgoers who walked through the entrance doors.

For years I’ve known and occasionally worked with Fuzz and Tim – and been a hapless victim of the wicked sense of humour they ruthlessly deliver. But at the same time, I’ve also witnessed the softer, loyal, deep-thinking side of the pair.

For example, when Fuzz tried to explain to me why Car SOS is such a hit with audiences across the continents, he insisted: “It’s because really, it has nothing to do with cars. It’s all about people.” 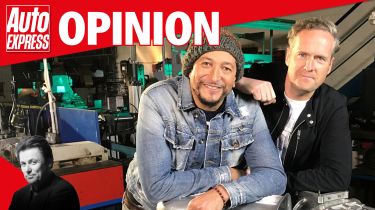 Tim chips in with similar sentiments and reckons that in a typical episode (they’ve done 102 so far), “it’s a rollercoaster of a show reflecting emotions we all go through in life: something sad, funny, entertaining or joyous.” He adds that classic cars have a “bright future”, largely thanks to huge advances in products such as biofuels.

But Fuzz is more philosophical. “In a way, it’s the end of one chapter for the internal combustion engine, but the opening of new chapters for different fuels,” he said. “I drive a 93-year-old model as my second car; I go to the tip or the shop in it. We go on days out in it. I could have, say, a new SUV.  But it would have a long way to go before it’s as green as my 1929 Austin.” Tim adds: “I’ve been told there are some EVs that take up to 35 years to become carbon-neutral in terms of emissions from the manufacturing process. But if you’re driving a classic car, it paid its dues long ago.”

The passion, knowledge and commitment these guys have for their subject matter is unquestionable. As is their enthusiasm for things automotive, with classics being their first love, but hydrogen, solar, pure-EVs and hybrid cars also being respected (and, when necessary, slated). But the fact that they’ve already converted one petrol-powered classic into a pure-EV says it all. To budding mechanics, Tim’s tip is: “Fail fast, learn quick. Get it wrong! That’s how you learn.” Fuzz adds: “Just do it. Get on with it. There’s no shame if your car later breaks down, because at least you’ve given it a go. So have another try.”

You can meet the boys on the Nat Geo/Car SOS stand at The British Motor Show, 18-21 August. And remember to take a selfie with one of the most famous car duos on TV.