We first saw the M badge feature on the second-generation BMW X5 back in 2009 and since then it’s been one of the best sporty SUVs you can buy. These latest spy shots show us BMW is developing a new X5 M, based on the upcoming facelifted X5.

While much of the car is still wrapped in camouflage, we can see the X5 M will receive a slimmer pair of headlights – a design trait that has appeared on new BMWs recently such as the latest 7 Series and iX electric SUV. These will flank a new pair of kidney grilles with a more angular design, although BMW has resisted fitting a set of oversized openings. Within the grilles we can see horizontal slats – a change from the vertical ones in the outgoing car.

The lower grille has a thicker bezel, and sits in front of a reprofiled intake that appears lower and wider than before. On this test car, BMW looks to be covering up a pair of fog lights and vertical cooling slats.

This pre-production example also wears a set of 22-inch alloy wheels, shod in Michelin Pilot Sport 4S tyres. The wheels themselves are the same kind as the current Competition’s. The X5 M’s roof spoiler and quad tailpipe setup remain, with a heavily sculpted rear bumper that looks similar to the current model’s, although the extra camouflage here suggests the final car could feature small tweaks to the diffuser. The tail-lights also look like they’ll be changed from the current model.

Inside, we’ll see the inclusion of BMW’s latest iDrive 8 infotainment system that has appeared on the iX electric SUV and new i7. This combines a 12.3-inch digital instrument panel and a 14.9-inch touchscreen beneath a single sheet of curved glass, and BMW will redesign the top of the X5’s dashboard to accommodate it. 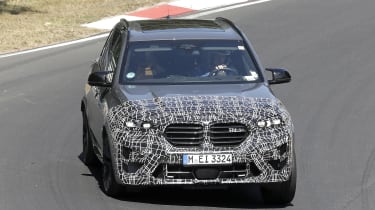 Key features of iDrive 8 include augmented-reality navigation, improved 5G connectivity and overhauled voice control. The user can navigate the interface via the touchscreen, or by using a click wheel on the centre console. Elsewhere, the X5 M’s cabin design won’t change dramatically. We’re unlikely to see the introduction of the ‘BMW Interaction Bar’ seen on the new 7 Series, but the new X5 M could get new switchgear and potentially some new trim and upholstery. Don’t expect the crystal trim bits from the iX to be carried over to the similarly-sized X5 M however.

In the UK, the more potent X5 M Competition is the only model available, which uses a 4.4-litre twin-turbocharged V8 producing 616bhp and 750Nm of torque. This drives all four wheels through an eight-speed automatic gearbox, and the new X5 M will retain the same drivetrain, albeit possibly with more power.

The BMW M5 CS uses a tuned version of this engine, with 626bhp. This makes it the most powerful road-going BMW to date, at least until the XM SUV is released with more than 700bhp. We don’t expect the new X5 M will borrow the XM’s plug-in hybrid powertrain however.

Either way, BMW’s engineers will probably fine-tune the dynamics of the facelifted car with retuned suspension settings, while the new My Modes feature of the iDrive 8 infotainment system could enable a wider range of drive modes than before.

Now check out the fastest SUVs on sale…