Alfa Romeo looks set to steal sales from the BMW 5 Series with a large electric car that will be on sale by 2027 – by which time Alfa’s line-up will be fully electric, in line with the brand’s plans – according to the firm’s CEO, Jean-Philippe Imparato. Despite the large SUV sector’s profitability, the new flagship model will take a more traditional shape.

Asked by Auto Express if the brand was developing a larger model as part of its future all-electric portfolio, Imparato told us, “We [Alfa Romeo] have a vocation to be a worldwide premium brand so I have to be in the view of the premium E segment [large cars]. I will be there around 2027.”

Pushed on whether Alfa’s new electric executive model would take the form of a large SUV or a more traditional saloon, Imparato continued, “What about SUV? What about sedan? What about something in between? Knowing that we will be BEV, the challenge becomes aerodynamics, and knowing that the DNA of Alfa Romeo is sedan, and knowing that the signature of Alfa is sport, the answer is probably not SUV – I want to reinvent sportiness for the 21st Century.”

Alfa’s large EV saloon will sit above the firm’s next-generation Giulia compact executive model, which Imparato confirmed to Auto Express will return as an all-electric version.

While the exec talked to us explicitly about saloon-based models in the firm’s future line-up, it’s thought that the brand will likely offer equivalent electric SUVs, as it does with the petrol-powered Giulia and Stelvio now.

Imparato has sent his team to the USA to help develop the new large saloon, a space in the market Alfa hasn’t occupied for a while but it will be a worldwide product so the car will come to the UK. He told us: “We sent someone there to develop the best answer to the market. I highly value that Alfa Romeo is selling cars in North America and in China, but we will go [sell it] everywhere in the world.” 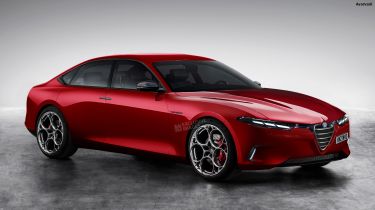 The Italian brand’s charismatic boss also told us that the car will deliver “a high level of performance and roominess without destroying the aero” and therefore range. Alfa’s parent firm Stellantis’s STLA Large platform (scheduled to arrive from the end of 2023) will likely form the basis of the as-yet unnamed model, allowing for battery sizes between 101 and 118kWh for a target range of up to 500 miles from a full charge, plus rapid-charging capability that will add 20 miles of range per minute.

Imparato’s comments on a high level of performance also puts a sporty Quadrifoglio version on the horizon, with the STLA platform catering for dual motors and a 0-62mph time as low as 2.0 seconds.

Stellantis investor plans have previously revealed that the group will have three electric motor variants at its disposal, with the most powerful offering up to 443bhp; a two-motor vehicle could then offer significantly more than 800bhp.

However, it’ll be regular single-motor variants of the new car that will rival premium players in this area of the market, a tag Alfa is keen to sustain having achieved strong financial results recently.

The Italian firm’s large electric saloon will rival cars such as the BMW i5 and Audi A6 e-tron, both of which will hit the market before the Alfa. Of course, Mercedes’ EQE electric saloon is already on sale.

While the new car is a long way from production it’s likely that pricing will rival cars such as the EQE, which currently starts from just less than £75,000. However, expect the price point for a large executive saloon to rise in the intervening five years.