More and more new-car buyers are opting for an SUV, and they’re massively popular on the used market, but the Octavia shows traditional segments can still be desirable. We like the Octavia so much that the hatchback was our 2021 Family Car of the Year, while its load-lugging sibling scooped Estate Car of the Year; the Octavia was also our overall Car of the Year in 2020. With its roomy cabin, spacious boot, comfortable ride and frugal powertrains, there’s a lot to like, while the wide model range means there’s something for everyone, whether the focus is on performance or economy. The neighbours might not be impressed if you buy a Skoda, but if you’re no badge snob there isn’t a safer place to put your money into a decent-sized family car.

2021 marked a quarter of a century since the Octavia was reintroduced to the Skoda range. It had originally been offered between 1959 and 1971, long before the Czech marque was swallowed up by the Volkswagen Group.

Relaunching the Octavia was a great move, because that 1996 model ruffled a few feathers in the family car market, with its well made and roomy cabin, efficient engines and impressive value for money.

By 2004 an all-new Octavia had arrived, and then another in 2013. By the time the Mk4 appeared in 2019 (even though it’s the Mk5, strictly speaking, thanks to that much earlier model), the Octavia was ready to take on all comers. More accomplished than ever, it’s an impressive all-rounder.

The fourth-generation Octavia went on sale in the UK in June 2020, in five-door hatchback and estate forms. At first, there were 148bhp 1.5 TSI petrol or 114/148bhp 2.0 TDI diesel engines; only the latter was available with a DSG automatic gearbox.

From September 2020 there was also a 109bhp 1.0 TSI e-TEC mild-hybrid engine, which came only with a DSG transmission. A month later, a plug-in hybrid version joined the range: the Octavia iV. This has a 1.4 TSI petrol engine backed up by an electric motor for a combined power output of 201bhp.

Also launched in October 2020 was the sporty Octavia vRS in hatchback and estate forms. Initially only a 242bhp 2.0 TSI petrol engine was offered, but this was soon joined by other variants (see the ‘Sporty but nice’ panel, right).

We wouldn’t steer you away from any of the engine or gearbox options, but if you mainly do long-distance motorway journeys, you’ll probably be disappointed by a hybrid’s fuel economy. In this instance a 1.5 TSI petrol or 2.0 TDI diesel engine will be preferable.

Although the Octavia shares its platform with the Volkswagen Golf and SEAT Leon, it’s the same sort of size as cars from the class above. That puts it up against models such as the Ford Mondeo and Vauxhall Insignia, both of which have recently been discontinued. They are practical, spacious family cars with reasonably keen prices, ready availability and a wide model range.

A couple of other reasonably mainstream family cars are the Peugeot 508 and Mazda 6. Neither is that common, because this segment is dominated so heavily by the Audi A4, BMW 3 Series and Mercedes C-Class. They’re all desirable but more costly, just like the Volkswagen Passat, which should also be on your shortlist. 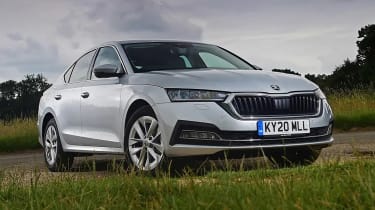 Electronics glitches are the most common gripe among Octavia owners. These can affect just about any aspect of the car.

No Octavia came with a spare wheel, but full-size and space-savers were offered for all models apart from hybrids (mild and plug-in).

We’ve no Driver Power data for the latest Octavia, but owner forums paint a happy picture in terms of faults. Some electrical glitches have been reported, but owners say these were resolved quickly and easily by Skoda’s franchised dealerships.

The Octavia’s VW Group roots are obvious when you look inside. The dash is modern, well laid out and very user-friendly, with its clear switchgear and instrumentation, while the multimedia system is reasonably intuitive. Cabin space is impressive, with huge amounts of head and legroom available.

Even better, this doesn��t come at the expense of boot space; the hatchback’s 600-litre boot (1,555 litres with the seats down) is huge. The estate is even bigger, at 640 and 1,700 litres (PHEVs are a bit less). All Octavias came with a 10-inch touchscreen as standard, while SE L and vRS versions received integrated sat-nav.

Owners of petrol and diesel Octavias can select fixed or flexible servicing; the latter is set at the factory, but can be changed. While the flexible programme allows up to 18,600 miles between checks, the fixed option sets the interval at 12 months or 9,300 miles; all 1.4 TSI hybrids are set to this with no flexible option.

Fixed-scheme Octavias alternate between minor (oil change at £150) and major (oil change and inspection at £230). Those on the flexible programme need a £230 major service every time; this cost drops to £185 after the car’s third birthday. Brake fluid is required every two years, at £65. All cars have a cambelt that needs replacing every 130,000 miles on diesels (£557), but on petrols and hybrids is designed to last for life. If it is replaced, the cost is £700 on a hybrid and £950 on a 1.0 TSI or 1.5 TSI.

Skoda has recalled the Octavia Mk4 only once so far. That campaign came in June 2020 and it was issued because 55 cars built in April and May of that year were fitted with an e-Call system that might fail to operate properly. The problem was purely software-related, so the solution was to update the control unit’s software.

As well as this vehicle recall, Skoda has also issued a campaign to recall defective 400 L roof boxes, which were available as an officially supplied option for the Octavia. The problem centred on the plastic covers that were there to protect the locking mechanisms. The covers could break, damaging the roof box and possibly the car. For information about this and all other recalls that affect Skoda’s product range log on to skoda-auto.com/services/recall-actions.

Skoda has tended to perform very well in our Driver Power surveys, with several first places, but the Octavia Mk4 has yet to make an appearance. There’s much love for the car on owners’ forums, but there has also been a lot of frustration centred on faulty software, leading to some people wanting to reject their cars. In most cases the dealers have been good, and software updates seem to have generally been effective.