The premium compact SUV sector is very hotly contested, so the DS 7 Crossback has its work cut out. Because DS doesn’t have the brand equity to compete on equal terms with Jaguar, Lexus, Volvo and the Germans, it has taken a different approach, which some buyers really like. Yet from owners’ forums it’s clear that customer service isn’t always what it should be, with some dealers seemingly out of their depth. When we tested petrol and diesel DS 7 Crossbacks against the XC40, the Volvo won on both occasions. Admittedly the XC40 is a particularly talented rival, but it shows that the DS 7 Crossback is no market leader, so make sure you try a few alternatives before committing.

Premium brands have been hot property for quite a few years now, so it’s no surprise that many mainstream car makers have been trying to move upmarket and shake off their bargain-basement image. One brand that took a slightly different path was Citroen, leading to the 2014 creation of its premium sub-brand, DS Automobiles.

For the first three years, all that was on offer were rebadged Citroens (DS 3, DS 4 and DS 5) – but after three years we got our first stand-alone product, the DS 7 Crossback. With a focus on stylish design inside and out, along with generous kit levels, DS is trying to differentiate itself from the usual premium suspects. The question is, does the DS 7 Crossback have enough talent to challenge used premium compact SUV rivals?

The DS 7 Crossback went on sale in La Premiere (first edition) form in May 2017. Buyers could choose between PureTech 225 (222bhp 1.6-litre turbocharged petrol) and BlueHDi 180 (177bhp 2.0-litre diesel) powerplants, both of which came only with an eight-speed automatic transmission, which was dubbed EAT8.

Six months later the range was widened to encompass PureTech 180 (178bhp 1.6 petrol) and BlueHDi 130 (128bhp 1.5 diesel) engines and four standard trim levels. All engines were teamed with the eight-speed auto with no manual option – apart from the BlueHDi 130, which came only with a six-speed manual gearbox.

While the E-Tense 4×4 is the best to drive it costs the most, too, although potentially impressive fuel economy compensates if you can charge regularly. After that it’s down to personal preference for petrol or diesel; both are good to drive, but the BlueHDi will be far more frugal. Kit levels are generous.

There are some very desirable and high-profile contenders in the premium compact SUV sector. One of the most accomplished is the Volvo XC40, which is well equipped, very safe and looks smart, while the Range Rover Evoque also majors on style, although it’s merely so-so dynamically.

Related to the Evoque, the Jaguar E-Pace looks smart and is very practical, plus there is a plug-in hybrid. The Audi Q3, BMW X1 and Mercedes GLA offer a decent blend of badge prestige, impressive build quality and superb ergonomics, with efficient engines for good measure.

Other contenders include the VW Tiguan and MINI Countryman, along with the Lexus UX – which is related to the Toyota C-HR.

There are 27 DS dealers in the UK, 22 of which are in England. Check where your nearest is. Citroen dealers won’t work on DS cars. 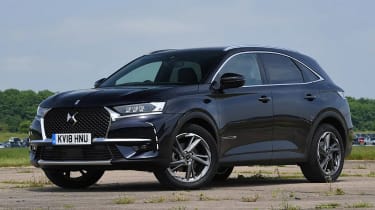 The special Louvre, launched in 2021, was available in blue, black or grey, with unique 20-inch wheels and a lot of bespoke decals.

The E-Tense PHEVs were fitted with a 13.2kWh battery pack, which was good for an electric-only range of 33-36 miles in the summer.

Trailer stability assist was standard across the range. The E-Tense 4×4 has the lowest towing weight at 1,200kg, the BlueHDi 180 the highest at 1,850kg.

The most common gripes among owners focus on electronic faults, with the most likely culprits being the stop/start and the electronic parking brake. Infotainment glitches are also far from unusual.

While the cabin stands out, you might find it a bit over-designed – and the infotainment menus aren’t especially intuitive. The quality and materials are impressive, however, the seats are comfortable, and there’s plenty of rear head and legroom. A panoramic roof slightly reduces headroom, though.

Boot space is impressive, too, with all models boasting 555 litres with the seats up, or 1,752 litres with them folded. The DS 7 is available with a 12.3-inch digital instrument cluster and 12-inch HD touchscreen, with satellite navigation offered across all models, along with Bluetooth, DAB radio and Apple CarPlay/Android Auto.

The DS 7 Crossback needs to be serviced every 12 months or 10,000 miles, with services alternating between minor and major. While the first two services are priced at £249 and £299, from a car’s third birthday the costs alternate between £225 and £375. The brake fluid must also be changed every two years, at a cost of £69, while the coolant should be renewed every 10 years or 120,000 miles at £90.

The four-cylinder 1.6-litre petrol engine is fitted with a timing chain, so there’s no cambelt to replace on that unit. However, the diesels and the PureTech three-cylinder 1.2-litre engine have cambelts, and they need to be replaced every 10 years or 120,000 miles. Using genuine parts, you can expect a bill of £595, but approved pattern components shave this to £495.

DS has issued a grand total of only one recall since it was formed as a brand in 2014, and this just so happens to have been for the DS 7 Crossback. The campaign was launched in February 2019, but it affected a mere 11 cars that had been built between 5 September and 26 October 2018. The issue centred on a component within the driver’s airbag that hadn’t been made correctly; DS didn’t specify which part was at fault or what the problem might be as a result, though. As a fix, all affected DS 7 Crossbacks were fitted with a complete new airbag.

Incidentally, since that single DS recall, across its entire model range Citroen has issued no fewer than 48 recalls – none of which was because of faulty airbags. However, several recalls issued before 2019 were due to airbag glitches.

Aside from the DS 3 appearing in our 2019 used-car polls (in 89th place out of 100), DS has yet to be represented in our surveys. Its models sell in quantities that are too small, but the firm did come 22nd out of 30 in our 2020 Brands survey. Owners like the performance, design, transmissions and engines, but are less enamoured with the infotainment, running costs, quality, reliability and ergonomics.