Peugeot’s updates to the e-2008 have focused on what buyers want and need at this level of the market: more range. It’s a small but useful gain and it’s great to see the brand acting on experience to boost this small electric SUV’s appeal. However, the so-so ride, frustratingly sluggish infotainment system and a shortage of rear-seat space (albeit with a big boot) still peg this Peugeot back to the same result as it achieved initially. We’re certainly grateful for the extra range and the added flexibility it brings, though.

Range remains one of the biggest deciding factors for electric car buyers. But with optimisation tweaks, many manufacturers can now unlock more miles more often and more easily. That’s exactly what Peugeot has managed to achieve with this newly updated e-2008 compact electric crossover.

But it hasn’t stemmed from an increase in battery capacity. The revised e-2008 still uses the same 50kWh pack as before, and it feeds the existing 134bhp electric motor.

The French brand has optimised other areas to unlock more range and push well through the 200-mile mark, with the car’s total claimed range now at 214 miles. The charging rate is unaltered, though, with 100kW capability giving an 80 per cent top-up in 30 minutes. A standard home charge will take seven and a half hours.

New tyres rated A+ for efficiency have been fitted to the car’s 17-inch wheels. These reduce rolling resistance and improve efficiency, and Peugeot has also tweaked the electric motor’s gear ratio to make it more efficient at higher speeds; it means the e-motor doesn’t have to spin quite as fast to maintain a 70mph cruise, for example, which results in lower energy consumption. 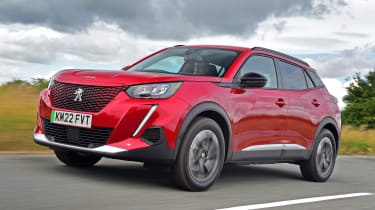 Also, a more efficient heat pump, teamed with a new humidity sensor mounted inside the cabin at the top of the car’s windscreen, better adjusts the heating and ventilation system to further optimise power usage. It’s surprising how much energy it can take to run the air-conditioning, and with this car Peugeot has shown how optimising multiple areas when engineering an EV can result in a useful real-world gain.

Our test proved that the changes were successful, because while the e-2008 didn’t quite match its claims, a genuine 180 miles in hot conditions (good for the battery, bad for energy consumption with the air-con always on) demonstrated decent efficiency.

Dynamically, this revised car feels pretty much identical to the pre-update model, which means plenty of easily accessible performance thanks to its 300Nm of torque. No ICE-powered small SUV can muster this output, and it makes the e-2008 feel peppy and alert on the move, plus it’s superbly easy to drive thanks to the single-speed automatic transmission. Officially, the 0-62mph sprint takes nine seconds, but in reality you’ll never need to go any quicker in a car like this; it’s the low-speed performance around town that counts.

The steering is still sharp, helped by Peugeot’s i-Cockpit layout and small steering wheel, while the e-2008’s ride is acceptable. Our Allure Premium test car came equipped with 17-inch wheels as standard, and although the e-CMP underpinnings sometimes struggle to deal with the worst urban scars and bumps on B-roads, the ride smooths out at motorway speeds, exactly as it should in a car like this.

However, the cabin layout still won’t be to everyone’s tastes. The infotainment system is laggy, although in this guise it does at least come loaded with features, including Apple CarPlay and Android Auto. That’s handy because the standard seven-inch set-up doesn’t feature built-in sat-nav, but it does include a reversing camera and digital instruments.

There’s a fair level of safety tech, too, and the 434-litre boot is a good size, but space in the rear could be better.