The MG 4 shows real promise, with more alert handling and peppier performance than we were expecting. It’s combined with solid charging technology, very usable claimed range and impressive practicality, so if MG can get the car’s pricing right when the 4 goes on sale in the UK (hopefully for around VW Golf money albeit rivalling the ID.3) it should be on to a winner.

MG has made real gains with its electric models, the ZS EV and the MG 5 – but this is the moment when things get really serious. Because the Chinese-owned British brand is no longer skirting around the edges of the electric-car market; with the MG 4, it’s going right after cars like Volkswagen’s ID.3.

Indeed, at precisely 4.29 metres long, the MG 4 is just three centimetres longer than VW’s hatchback. And like that car, it’s not quite a regular five-door Ford Focus rival, and yet not quite a proper SUV.

We don’t know the prices yet, but we do expect the MG 4 to join its ZS stablemate in dipping under the £30k mark when the company starts taking orders near the end of the year. But before then, we’ve got a chance to drive a late prototype, on roads near Munich, home to the company’s German headquarters. 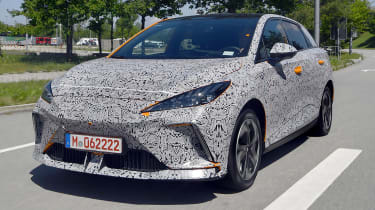 The MG 4 is doubly significant for MG because it is the first car to be built on the company’s new electric-focused Modular Scalable Platform (MSP). It promises three things. Firstly, the battery is only 11cm thick, potentially freeing up cabin space while not requiring too thick a floor. Secondly, the platform is scalable; MG says that wheelbases between 2.65 and 3.10 metres are possible. And finally, it will support battery capacities of between 40kWh and 150kWh.

The MG 4 should be available with two batteries. The more modest version will have 168bhp and 51kWh – enough for up to 217 miles between recharges. While our test car is the higher-end version, with 201bhp and 64kWh; MG’s WLTP test says it should be good for up to 280 miles.

The overriding impression of our short drive is that this is a busy, lively vehicle. The weight distribution is 50:50, the single electric motor drives the rear wheels and the chassis tuning is definitely more in line with MG’s sporting heritage. We’d go as far as to say that it really craves corners, the MG 4, thanks to direct, responsive steering. The overall set-up only increases our curiosity about the rumoured performance version, which should be four-wheel drive and pack up to 400PS.

Inside, as with the ID.3, the instrument panel has been pared back to a small display behind the steering wheel, showing only essentials like speed, traffic-sign info and the car’s level of charge. The rest of the MG’s functions – everything from multimedia to the car’s driving modes – are controlled via a landscape-layout infotainment screen in the middle of the dash. Don’t be fooled, incidentally, by the rotary controller on the centre console; it’s just the gear selector, so all inputs into the car’s system are via the touchscreen.

MG’s Chinese owner says that the MSP platform is being launched as a 400-volt system, but that it could be upgraded, in time. Just like the Korean Kia EV6 or Porsche Taycan, the system voltage could be upgraded to 800 volts to enable faster charging. Speaking of which, we haven’t received an official number on the speeds possible, but anything below the 125kW of our test car would be disappointing.