Kia’s mild update to keep the XCeed fresh has helped, but its latest products – the new Niro and Sportage SUVs, plus the EV6 – highlight this is a car with its roots in Kia’s outgoing generation of technology. But the XCeed is a popular model that sells well, so there’s no need to rip up the play book. If the new model’s pricing doesn’t increase too much, it’ll be a case of X marks the spot for Kia again.

Crossovers are key to sales for Kia, and the XCeed is a big seller in the UK, accounting for 10 per cent of the brand’s total sales and more than half of the mix when it comes to the Ceed family as a whole. So it’s no surprise that, following updates to the regular Ceed family last year, the XCeed has now been treated to a round of changes.

These include a new 201bhp 1.6-litre turbocharged four-cylinder engine from the Ceed GT – in Europe, at least. The UK won’t take this engine, nor for now the 1.0-litre three-cylinder turbocharged petrol; Kia says the 1.5 T-GDi four-cylinder turbo petrol will take the bulk of customer interest, so it’s this and the plug-in hybrid that will form the UK range for the foreseeable future.

It’s the 1.5 model we’re driving here, in GT-line spec, which is a new trim addition to the line-up. With 158bhp and 253Nm of torque on offer, performance is adequate Full specs haven’t been confirmed, but the previous 1.5 DCT model accelerated from 0-62mph in 8.9 seconds, so we expect similar for this car, but you’d never call it fast. And if you do ask for more rapid acceleration the engine note sounds strained and the growl from under the bonnet impacts refinement.

The seven-speed dual-clutch automatic transmission doesn’t like to be hurried either, so part-throttle driving is where the XCeed feels most at home. But the shifts are at least smooth, if a little on the slow side. Selecting Sport mode doesn’t improve things much.

Raising the ride height by 44m compared with the standard Ceed, plus seven per cent softer springs at the front and four per cent softer at the rear means there’s more of a focus on comfort. But mechanically the XCeed is unchanged compared with its predecessor, so from a ride and handling perspective it still delivers a respectable level of comfort.

It’s settled enough on the motorway, but patchy tarmac and ridges in the road surface at lower speeds – plus sharper bumps around town – do show up the limitations of the set-up and the XCeed’s suspension can react a little abruptly to inputs on occasion, despite some clever bump stops suspended in hydraulic fluid on the front axle, a feature unique to the XCeed within the Ceed family.

Along with a gentle redesign that features a restyled grille and front bumper, revised front and rear full LED light clusters, and a new rear diffuser element – plus a sportier look for this GT-line model that includes a new lower air intake, the air curtains in the bumper finished in dark chrome, 18-inch alloy wheels and a body-coloured diffuser element at the rear – inside the cabin Kia has applied a series of subtle changes. 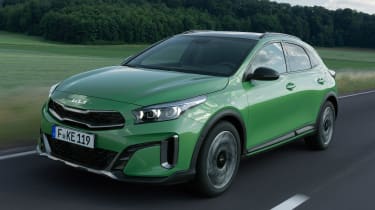 There are new graphics for the 12.3-inch digital dash, linked to the car’s drive modes, while the 10.25-inch touchscreen fitted to our test car boasts Apple CarPlay and Android Auto, with the possibility to hook up two phones by Bluetooth.

On this subject, there’s been a focus on increased connectivity too, with a new feature that allows users to check sports scores from the infotainment system, for example. Kia Connect live services that give info on parking availability and prices and live traffic data are available.

There’s a host of advanced driver assistance and safety tech too, so the XCeed is on par with rivals when it comes to safety, while it offers strong practicality too. Boot space stands at 426 litres, rising to 1,378 litres with the 40:20:40 split-folding rear seats dropped, and as an ownership proposition, with that all-important seven-year warranty, it’s tempting, assuming prices for this new model don’t rise too much over its predecessor when Kia UK finalises them. We expect this new GT-line model in 1.5 T-GDi auto form to cost around £27,500.