Throughout its lifetime, the Honda Civic Type R has been sitting comfortably in the upper echelons of the hot hatch segment. A new one has just been revealed, codenamed the FL5, it succeeds the FK8 model – which remained one of the finest hot hatchbacks until Honda stopped production at its Swindon plant last year. To get an idea if the new model will live up to expectations, we went to Italy to sample it from the passenger seat.

Before we get into how the new Civic Type R goes, let’s revisit the design of the new model. The past few generations of Civic Type R (and regular Civic) have divided opinion in terms of looks, becoming increasingly aggressive with fins and ducts, culminating in the wild-looking FK8 generation. The new FL5 model is much more restrained.

There’s still a huge wing on the back like something from a touring car, and there’s a bespoke body that widens the Type R significantly over the regular Civic. Behind the front wheels (which have shrunk from 20 to 19 inches and are wrapped in Michelin Pilot Sport 4S tyres) are some vents to aid brake cooling and looking down the side there are some side skirt fins, which Honda says help divert air away from the rear wheels, improving stability.

Like its predecessor, the FL5 features a triple-exit exhaust system. However, it’s made up of two smaller tips on the side and a larger central outlet, the opposite of the FK8’s. The system is integrated into the diffuser, which works with that big spoiler (sitting on new diecast aluminium mounts) to provide 900Nm of downforce at 124mph.

The powertrain is an updated version of the 316bhp K20C1 found in the FK8. Honda hasn’t divulged specifics but it’s got more power thanks to better cooling and a revised turbocharger. The six-speed manual gearbox is retained too. The old car offered one of the slickest gearshifts of any car on sale, so we hope it’ll be a similar story with the new one.

The location of choice for this first experience of the new Honda Civic Type R is the Tazio Nuvolari circuit near Milan. It features long, sweeping bends, tight chicanes, a hairpin and a lengthy pit straight to stretch the Type R’s legs.

Jumping in the passenger seat for some hot laps (in more ways than one as temperatures were in the mid-30s), I’m joined by Nestor Girolami. He’s one of Honda’s drivers in the World Touring Car Championship where he pilots a racing version of the outgoing FK8 Civic Type R.

Having just come off the back of a win the previous weekend at the Autodromo Vallelunga Piero Taruffi circuit a few hours away, he’s keen to try out the new model. 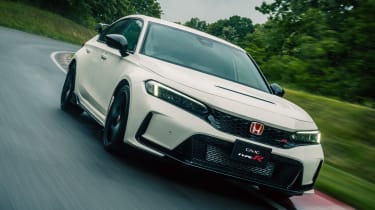 The first thing that strikes you getting into the new Civic Type R is just how much more grown up it looks and feels than before.  The steering wheel is trimmed in suede, the air vents are aligned on a horizontal strip across the dash and touch points like the door handles and gear lever leave a premium impression.

Red seats have been a staple of the Type R since the 1990s and these latest ones are the best yet. Honda says they’re made up of a ‘polyhedral shape that supports the body’, which is certainly true, thanks to the extra large bolsters.

As we get ready to take to the track, Nestor points to the display screen showing a 67 degree temperature on the intake. “It’s already very hot, let’s see how it goes”, he says. Instead of the Comfort, Sport or Individual mode, we’re in ‘+R’ – which automatically sets the engine, steering, suspension, engine sound, rev match function and gauges to the raciest setting.

We’re soon onto the pit straight where Nestor is zigzagging across the track to ascertain grip levels. Despite some rather immediate changes of direction, the 265 section (20mm wider than before) Michelins stick to the tarmac.

The turn-in is almost immediate and despite a 35mm longer wheelbase than the old car, Nestor manages to rotate the new Type R with ease on the first corner. He enlightens me while we tear around the circuit. “The steering is better (than the FK8), there’s a lot of feedback and it’s quick. There’s a lot of grip but you can get the rear loose on some of these corners.”

A few moments later we brake for a tight left hand corner and he unsettles the Type R to give the rear wheels a bit of slip, which is quickly straightened out with some throttle.

Braking was equally impressive. From the passenger seat you can only get an idea of stopping power but Honda’s new hot hatch scrubs off speed ferociously.

Even from this brief experience it’s clear Honda has managed to find plenty of areas to improve the Civic Type R formula. We expect it could ride a little firmer on the public road than the old model, judging by Honda’s claim that the new Type R’s chassis is 15 per cent stiffer, but we’ll have to wait until we drive one on the UK roads to find out.

We’ll also await a Nurburgring lap record attempt. Honda broke the production car front-wheel-drive lap record with the FK8 in 2017 and the new model will provide a chance to reclaim the title from the Lynk & Co 03 Cyan Concept.