Cupra is moving into new territory with its all-electric Born hatchback, but has it managed to produce an EV that delivers on its sporting aspirations? Well, sort of. The Born is definitely a more striking car to look at than its closely related Volkswagen ID.3 stablemate, while its interior is well equipped, feels more stylish and is full of character.

However, a sporty hot hatch is all about the driving, and although the Born is good in this area, it’s not outstanding, making the most sense in punchy e-Boost form where it offers extra power and performance.

There was a time when SEAT was known as the sporty spin-off marque of the Volkswagen Group, offering buyers a taste of VW build quality, onboard tech and engine performance at a more affordable price. But, with the Spanish manufacturer now focusing on a more mainstream lineup that includes a raft of family SUVs, its Cupra sub-brand (now a standalone concern) has taken up the mantle of producing cars that deliver a sense of sportiness and driving fun.

After sprinkling its engineering knowhow on rebranded versions of the Leon hatchback and Ateca SUV, Cupra launched its first all-new model, the Formentor coupe-SUV, in 2020. Featuring strong petrol and plug-in hybrid engines (some with more than 300bhp), it was an impressive debut, and Cupra is now underway with expanding its lineup.

The all-electric Born hatchback is the first of a number of electrified models that Cupra will launch over the next few years; the Terramar plug-in hybrid SUV, all-electric Tavascan SUV and Urban Rebel electric city car are all due by 2025. 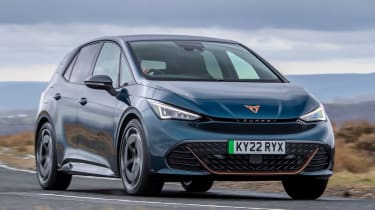 The Born’s sporty character will rival everything from the mechanically similar Volkswagen ID.3 to the Tesla Model 3, while its practical five-door hatchback body style gives it an advantage over smaller EV hatches such as the MINI Electric and Renault Zoe which offer less space and are not that much cheaper to buy.

Two battery options are available for the rear-wheel-drive Born; a 58kWh version offers either 201bhp or 227bhp, while a 77kWh variant delivers 227bhp and an increase in range from around 260 miles (for 58kWh models) to a claimed maximum of 340 miles from a single charge. An entry-level 45kWh powertrain will be available later in 2022.

It’s not only the distinctive, copper-coloured accents that help the Born stand out from the crowd; the battery-powered hatch comes with a generous list of standard kit that includes 18-inch alloys, LED headlights, adaptive cruise control and a 12-inch infotainment display with wireless smartphone connectivity. You can choose from either the V1, V2 or V3 specifications, with the higher grade trims adding premium touches such as bigger wheels, rear privacy glass, upgraded upholstery, heated front seats with a massage function and a driver’s head-up display.

For an alternative review of the Cupra Born, visit our sister site drivingelectric.com…