Land Rover is bringing back the classic Defender in Trophy II guise – a nod to Bob Ives’s Camel Trophy-winning Defender of 1989. This may sound like déjà vu, because Land Rover did the same last year with the Defender Trophy, however there are a few critical differences in the latest model.

Like previous Trophy Defenders, this one gets a V8 engine. Specifically, a 5.0-litre V8 petrol unit, producing 399bhp and 515Nm of torque. This is mated to an eight-speed ZF automatic transmission. To make sure the Trophy II has the stopping power to match, Land Rover has equipped an uprated brake system with 335mm discs up front and 300mm discs at the rear, both with four-piston calipers.

The suspension has also been tweaked for off-road use, with greater travel and tougher springs. The toughness extends to the wheels and tyres with gloss black 18-inch heavy-duty steel wheels wearing mud-terrain boots. Wading depth stands at 500mm.

Land Rover has revised the exterior with a protective A-frame ahead of the windscreen, which also houses a winch to help get the Trophy II out of trouble. The satin black bonnet offers more than just a visual cue as it reduces glare in bright environments. If you find yourself traversing remote areas at night, meanwhile, the 1.27-metre LED light bar should provide impressive visibility. There’s also front skid plate to protect the engine and a rear ladder provides access to the roof rack. 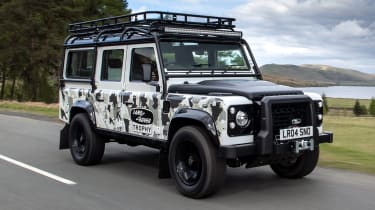 Inside the Trophy II, the equipment levels are a world away from Defenders of old. There are Recaro CS sports seats, leather trim on the dashboard, doors and headlining and an infotainment system from Land Rover Classic with sat-nav and smartphone connectivity. An Elliot Brown clock face mirrors the exterior camouflage on the dash.

Unlike the Eastnor Yellow Trophy from 2021 however, the new model is covered in a white and black snow camouflage featuring 23 famous off-roading locations, including Land Rover’s expeditions in South Africa, Loas and Peru.

Michael van der Sande, Managing Director, Jaguar Land Rover Special Vehicle Operations, said: “The Defender has conquered terrains across the world. Our latest Classic Works V8 Trophy II honours this expedition heritage in its unique exterior design, paying homage to some of these stunning locations. As well as taking delivery of a highly collectible vehicle, our owners will have the unique opportunity to put theirs to the ultimate test in a bespoke Land Rover Trophy event.”

Like last year’s Defender Trophy, numbers will be limited to just 25. Customers can purchase from Land Rover Classic now with prices starting from £225,000 for the 90 model.