The boss of DS has not ruled out building a production version of the 804bhp all-electric E-Tense Performance coupe, revealed as a test bed for the brand’s Formula E technologies. However, a customer version would almost certainly be a track-only car.

Speaking at the London ePrix, DS CEO Beatrice Foucher admitted that while “sporty cars” don’t make a great deal of sense for the plush and comfort-oriented DS brand, it would be satisfying to see the marque’s racing technologies available for sale.

“We will never go to sporty cars, this is not the positioning of the brand. But at the end of the day when everyone saw the prototype for the first time, we said ok that would be good if we could build one or sell this kind of car, so the decision has not been taken yet,” said Foucher.

“And if we make the decision, we will have to embed the technology from the Formula E [cars]. It means that, in terms of homologation, it will not be possible to homologate for the road, it will only be for the track.”

The additional cost of developing the car to be road legal would be hard for the brand to justify, admitted Foucher.

The E-Tense Performance concept is an all-electric coupe that makes use of a body made entirely out of carbon fibre and a powertrain lifted from the electric racing series. It consists of a dual electric motor setup, providing drive to all four wheels. Maximum power stands at 804bhp, while the system’s maximum torque output stands at a colossal 8,000Nm.

No speculative performance figures have been confirmed, but it’s not hard to imagine that the concept would achieve similar numbers to a second-generation Formula E car, with 0-62mph in around 2.8 seconds. It will be put through its paces by Formula E champions Jean Eric Vergne and Antonio Felix da Costa when it becomes a running prototype.

As well as being a showcase for motor technology, the E-Tense Performance also hints at future battery and regeneration concepts. A ‘compact’ battery in a carbon-aluminium composite housing is placed in a low position, just past the centre of the car, and it features ‘innovative’  battery chemistry and a new thermal management system.

The brand says this battery system is a future technology that could trickle into future production cars. All cars that DS will launch from 2024 onwards will be fully electric. 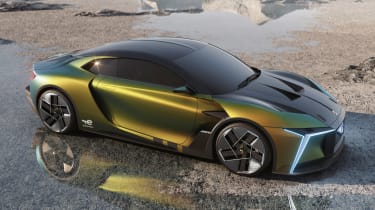 The concept’s regeneration system is so powerful that while the car has brakes, the brand claims it doesn’t necessarily require them. It has a maximum regenerative capacity of 600kW.

“It is a laboratory that we will use to analyse the behaviour of components and to develop them with a view to future manufacturing,” explains DS Performance director Thomas Chevaucher.

“The idea is also to find solutions to lower costs, make them easier to manufacture and explore implementations in production models. The next generations of the E-Tense range will benefit from these developments.”

However, while the E-Tense Performance is a showcase of DS battery and motor technology, it’s also a preview of the brand’s next design language.

As mentioned above, the  E-Tense Performance isn’t in the production plan as a road-going car, but DS has said that the front end in particular points to the design direction planned for the brand’s next-generation electric cars.

A new surface takes the place of the grille, and is flanked by expressive LED daytime running lights made up of 800 individual LED units. But the rest of the car showcases aerodynamic developments, with various cuts and ridges, and new 21-inch wheels with aerodynamic inserts.

Some touches are more typical of a concept car, such as the replacement of the headlights with a camera system for data collection. The paint scheme is similarly show stand, with a ‘beetle-effect’ pearlescent paint that shifts colour depending on the angle the car is viewed from.

Inside, the coupe gets typical sports car touches such as a pair of bucket seats, while the steering wheel is taken directly from a Formula E racer.