1999 saw BMW take outright victory at Le Mans with the iconic V12 LMR and the German firm will return to the legendary race with its new M Hybrid V8 hypercar in 2024. The decision follows the firm’s confirmation of its entry into the US-based IMSA Sportscar Championship in 2023 and World Endurance Championship in 2024.

Frank van Meel, CEO of BMW’s M division said of the new car, “The most critical task and the greatest challenge for the design team in the LMDh programme design team was that the prototype must be clearly recognisable as a BMW M Motorsport car. And I can say this to all the fans, just one look is enough to confirm that the BMW M Hybrid V8 is a BMW.”

The BMW M Hybrid will race against Acura, Cadillac, Porsche in IMSA’s new GTP category in 2023, with Alpine and Lamborghini joining in 2024. Distinguishing the BMW from its rivals in terms of design are some features taken from BMW M road cars. This includes a pair of massive kidney grilles, twin headlight strips, a ridged bonnet similar to the current M3, ‘M Hook’ mirrors and even a window graphic on the side detailing a Hofmeister kink. 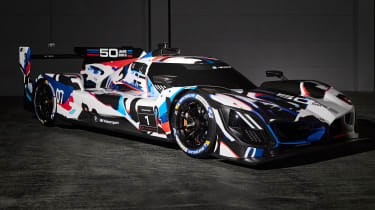 Like other LMDh cars, the BMW M Hybrid will use a hybrid system with a 49bhp electric motor mated to an Xtrac gearbox. In the BMW we’ll see the same 4.4-litre twin-turbocharged petrol V8 unit from the upcoming XM, but detuned to 670bhp to fit LMDh regulation. BMW has teamed up with Italian manufacturer Dallara for the chassis, just like Cadillac.

Check out the latest on the BMW XM here