Bentley to break sales and profits record in 2022

Bentley has revealed its half-year profits for 2022 and things are looking good for the British luxury car manufacturer. It revealed operating profits of £333.97 million, £7.56 million more than the entirety of last year where Bentley posted its previous record-breaking £326.41 million profit.

Adrian Hallmark, CEO of Bentley Motors, commented on the firm’s finances: “Despite the continued global economic instability, it is promising to see Bentley is showing financial consistency as we reinvent the company in line with our Beyond100 strategy and form a basis to withstand further external shocks.” 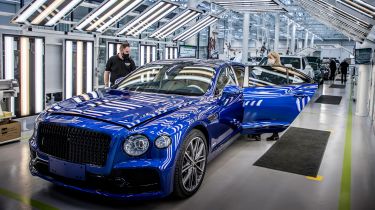 Revenue per car climbed from £156,000, to £178,000. Bentley says this is largely due to increased levels of personalisation. “Significant increase in demand and capitalisation of our Mulliner personalisation programme has driven record return on sales, and continued global interest in the freshest model line in the luxury sector has resulted in record high revenues,” Said Hallmark.

The best-selling Bentley remains the Bentayga SUV, with 40 per cent of total sales. The Flying Spur accounts for 27 per cent and the Continental GT takes in 33 per cent.

Bentley says the new figures will help support its strategy to become a pure-electric brand. This includes a £2.5m investment at its Pyms Lane factory in Crewe.