Ford has confirmed that the new Mustang will be unveiled at the Detroit Motor Show on 14 September by posting a short video on its Twitter page. The teaser clip features a manual transmission logo and the soundtrack is clearly a revving V8.

The graphic of the gear knob confirms a six-speed manual will be offered, most likely alongside a version of the current Mustang’s 10-speed automatic transmission. As for the V8, we’re not sure if it’ll be a continuation of the 5.0-litre naturally-aspirated unit of the outgoing model or an all-new engine.

Our previous spy shots taken outside Ford’s Michigan’s Flat Rock Assembly Plant suggest the proportions will remain the same, and it’ll use a dual-exit exhaust system. Test cars still feature heavy camouflage so there’s not much given away in terms of styling just yet. The retention of the current car’s production line suggests the new car isn’t likely to deviate a whole lot from the usual Mustang formula. 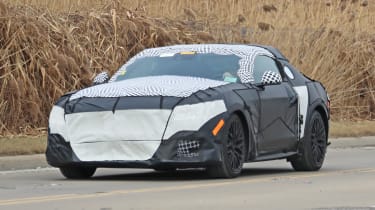 Excited to confirm that we’ll unveil the all-new, seventh-generation @FordMustang September 14 at the Detroit Auto Show. It’s a stunning car and I’m excited to share it with the world! 🐎 #SaveTheManuals pic.twitter.com/d2kdQioBWY

The current Mustang is the first in the model’s history to be sold by Ford in the UK. It’s now only available with the V8, with the Blue Oval canning the 2.3-litre turbocharged four-cylinder Ecoboost model.

We can expect the full debut of the all-new Mustang sometime next year, with sales starting in 2024 – which would chime with the Mustang’s 60th anniversary.

Check out our list of the best muscle cars ever built…