Kia’s XCeed accounts for 10 per cent of the brand’s total UK sales, so it’s no surprise the Korean firm has chosen to update its big-selling family crossover for 2022, adding more style and interior technology, while retaining a plug-in hybrid powertrain option for this Citroen C4 and Mazda CX-30 rival.

Design tweaks for the new XCeed model are subtle and broadly follow those seen on the facelifted Ceed hatchback, which was revealed last year. As a result the XCeed features new LED headlights and a revised front grille, while there’s also been an emphasis on making the car look sportier.

The silver skid plate on the lower front bumper, plus new air curtains that guide air down the sides of the car (made possible by integrating the foglights into the new headlight clusters) help here, as does the option of chunky 18-inch alloys and a new, racier GT-Line trim level for the updated XCeed.

At the rear the XCeed features new, slimmer LED light clusters, while the 44m increase in ground clearance over the standard Ceed five-door hatchback gives the crossover a more off-road-inspired look.

The new GT-Line trim gets a few more touches for an even sportier appearance, according to Kia, with an “edgy” tiger nose grille, sportier lower air intakes, side cladding, a body-coloured lower diffuser at the rear and hexagonal-shaped rear lights.

There are some significant changes inside, too. While the XCeed doesn’t inherit the dual-screen set-up from Kias such as the new Niro and Sportage SUVs, it does feature a 12.3-inch ‘Supervision’ digital dash with configurable themes linked to the car’s drive modes. It’s joined by a ‘floating’ 10.25-inch central touchscreen on higher-spec models, while lower-spec cars feature an eight-inch set-up.

Wireless Apple CarPlay and Android Auto connectivity are included, along with a new ‘Sports’ feature that brings live scores and highlights to an app on the central touchscreen. Kia Connect live services including traffic data and information on parking at your destination are also available.

The XCeed also doesn’t inherit Kia’s Multi-Mode panel, so it retains its predecessor’s physical controls for the audio and climate control systems located just below the touchscreen. 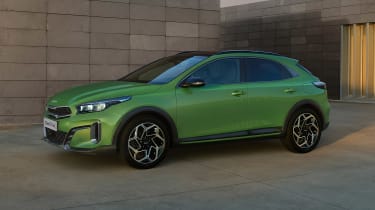 Storage and room inside the facelifted XCeed should be identical to its predecessor, while the 426-litre boot is a good size for the class. This rises to 1,378 litres with the 40:20:40 split-folding rear seats down and there’s a moveable boot floor as well as a smart powered tailgate.

While the new XCeed will launch in Europe with an all-electrified powertrain line-up, Auto Express understands that the offerings in the UK will mirror that of the outgoing car. This means we won’t take the new mild-hybrid model; instead, the UK will get a 1.5-litre turbocharged four-cylinder petrol engine producing 158bhp and 253Nm of torque for a 0-60mph time of 8.7 seconds when mated to the standard six-speed manual gearbox.

We understand that, in time, there’s potential that the UK will also take Kia’s 118bhp 1.0-litre turbocharged three-cylinder petrol unit.

The XCeed will retain its plug-in hybrid powertrain, which consists of a 1.6-litre four-cylinder petrol engine mated to a 8.9kWh battery and an electric motor for a total of 139bhp and a claimed all-electric range of 30 miles. Charging should take two hours and 15 minutes from a standard three-pin socket.

The XCeed is the only Ceed variant to feature hydraulic bump stops on its front suspension, which is said to help provide a compliant ride, while the car’s chassis has been tuned in Europe. Springs that are seven per cent softer than those of the standard Ceed at the front and four per cent softer at the rear also help boost comfort, while the power steering set-up has been tuned to deliver alert initial response to inputs.

Steering weight, throttle response and, where the XCeed is fitted with an automatic transmission, gear shift response can all be adjusted as part of Kia’s Drive Mode system, with a choice of Eco, Normal and Sport.

Finally, there’s the level of safety systems on offer that you’d expect from a new family car, with a host of advanced driver assistance systems that includes Navigation-assisted Smart Cruise Control, which adjusts the car’s speed according to the limit. The usual collision warning and avoidance systems are all present, as is autonomous emergency braking and cross traffic alert.

The XCeed accounts for 51 per cent of all Ceed sales, and it was the top-placed car in Auto Express’s recent Driver Power customer satisfaction survey, so it’s no surprise the brand has overhauled this popular model.

Given the increase in technology on offer, expect a proportionate increase in price, with the new XCeed potentially starting from just over £25,000 when it goes on sale towards the end of the year.