Skoda has confirmed that its forthcoming new design language will be introduced by a concept called Vision 7S – and issued a teaser image showing that it will feature a novel cabin layout for up to seven people.

The announcement confirms the scale and dimensions of the car teased in a design-studio image earlier this year. As its name suggests, Vision 7S will be a large SUV, and by brightening the official picture it’s possible to see a charging cable attached. It’s likely, therefore, that Vision 7S will preview not only a new design direction for Skoda, but also a seven-seat all-electric model.

The top-down sketch shows that the concept has, in effect, a 6+1 layout, with two adult seats in each of the three rows and then a novel centrally mounted child seat, which would place a baby right in the centre of the vehicle. This is likely to be a show-car element, with the space in the middle of the car ultimately being used for three seats, to deliver a full seven-seater.

Other elements of note include what appears to be a light bar in the middle of the dashboard top – potentially a reference to Skoda’s Bohemian glass culture – and, in a sign of the brand’s developing self-confidence, a Skoda text logo on the outside of the C-pillar. 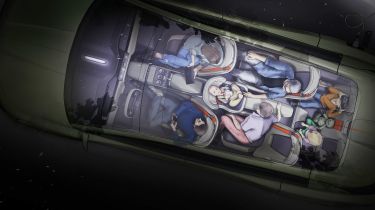 Skoda says that the Vision 7S will alter its dashboard configuration when the driver wants to relax – during a recharge, for example. The steering wheel and instrument cluster will slide forwards, while the large central touchscreen will move from a portrait layout to a landscape format to make it better suited to watching entertainment. This is confirmed by the ‘Drive/Relax’ switch in the centre console, which illustrates the screen rotating, and the teaser image, which shows the landscape screen featuring shortcuts to media sources such as YouTube and Netflix.

Skoda also says the car will feature backpacks integrated into the second-row seat backs, and phone mounts in the backs of the front seats to allow middle-row passengers to enjoy entertainment on the move.

No official date has been given for the reveal of the concept – which will mark the arrival of a new design language, labelled ‘Modern solid’. However, Skoda’s former boss Thomas Schafer told us earlier this year that it will be public by early September.