New Porsche Taycan update adds up to 31 miles of range

Porsche has announced the latest batch of updates for the Taycan. Changes include improved range, better charging capabilities and infotainment system tweaks. Customers can take their Taycan to dealerships now to receive the new features.

The Taycan has been with us since 2019 and since then it’s received a few updates to its tech, mainly thanks to Porsche’s growing knowledge of battery usage in electric vehicles. Porsche has sold over 75,000 Taycans and every single one will be able to benefit from the latest update.

“This campaign will allow all customers to benefit from the continuous further development of the Taycan. We have extensively optimised the model series in almost every respect since 2019”, says Kevin Giek, Vice President Model Line Taycan. “New functions have been added and others have been revised or tweaked to further enhance the customer experience.”

Porsche has looked at the Taycan’s powertrain and now the Taycan is able to de-energise the front electric motor to allow for less friction during coasting in ‘Normal’ and ‘Range’ mode. This should place less stress on the battery and increase range. Depending on the model, Porsche says up to 50km (31 miles) of range could be added.

In order to make the operating status of the all-wheel drive system easier to see, the updated Taycan now shows an energy-flow indicator on the central display. Energy recuperation can also be set to automatic so it’s retained even when the driver changes the driving setting. 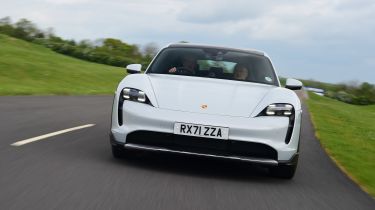 Charging has also been improved as the Taycan can now receives its maximum rate of charge over a wider range of outside temperatures. Maximum charging time won’t charge, but Taycan owners should see more consistent charging.

A 22kW onboard charger is also now available for retrofitting. The retrofit includes the activation of the ‘Plug and Charge’ function – enabling charging payment without a card or app.

Porsche Communication Management (PCM) is another software update included in this overhaul. There are new functions, new menu designs plus optimisations of the voice control system and Spotify integration. The navigation system can also filter charging stations and the head-up display has been tweaked, too. The ‘ParkAssist’ function now works at a greater range, resulting in a better search for parking spaces. Customers can also request keyless opening for the doors and boot.

The free updates for older Taycan models will be rolled out this year to bring them inline with 2023 versions of the car. Porsche says customers should expect to wait a day for the revisions to be installed.