Kia already has plenty of experience in the all-electric crossover market with the Soul EV and electric versions of the Niro, but now there’s a new model coming called the EV4. We first caught sight of the EV4 last year, when Kia announced plans to launch 14 new EVs by 2027.

Two ‘EV’ SUV models will follow the latest EV6. According to European product boss Sjoerd Knipping, the Korean brand’s second “EVx” car will be a large SUV targeting the US. But more importantly for us, it will be followed by a model developed for the European market – Knipping spoke of “balancing” the US and other territories.

Kia holds trademarks for badges ranging from EV1 to EV9. The large SUV could be a production version of the EV9 concept, which would offer seven-seat capability similar to that of Hyundai’s Ioniq 7 SUV, confirmed for launch in 2024. It will be followed by a crossover potentially called EV4, sized as a rival for the Volvo C40, Mercedes EQA and the new BMW iX1.

Our exclusive images preview what the EV4 could look like, based on the shadowy teaser images from the announcement. Design cues heavily inspired by the EV6 will probably include the headlights and a full-width LED rear light bar, as well as muscular surfacing and Kia’s new logo. The dark ridge on the C-pillar should also make its way over from the EV6 as will the black wheelarch extensions.

The EV4 will be based on the Hyundai-Kia Group’s E-GMP platform for electric cars. A slightly downsized wheelbase compared with the EV6 (2,900mm) means its dimensions will be closer to those of Kia’s new European-spec, fifth-generation Sportage SUV. Clever packaging made possible by the versatile platform will maximise cabin space, with fewer compromises than in a combustion-engined car. And even with a shorter wheelbase, the EV4 is likely to make use of the EV6’s battery technology. 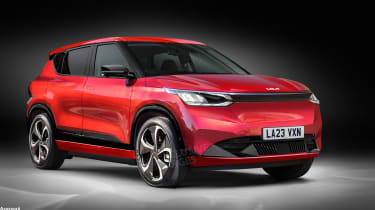 That means 58kWh and 77.4kWh could be offered for a maximum range of just over 300 miles in the mid-size EV4 SUV. Expect dual-motor powertrains, too, giving four-wheel-drive capability and potentially up to 321bhp, although a 226bhp single-motor version is also expected to be available, lowering the entry price.

With the E-GMP set-up offering 800-volt electronic architecture and a maximum 350kW rapid-charge rate, the bigger battery should charge from 10 to 80 per cent in a mere 18 minutes, or take 62 miles of range in only five minutes.

While the E-GMP platform will form the basis of many future Kia EVs, Knipping also outlined that it “won’t serve all segments, in particular some smaller sectors.” He added, “Not all cars need 800V tech, so could we use our 400V tech in places? We need to see if the market segments we serve can be with derived platforms [such as the current e-Niro], or will there be a new platform?”

Kia plans to have a line-up of 11 electric cars by 2025; six standalone EVs, with five “derivative” EV models. Knipping says: “We have to work out what is the priority; the sectors where to push EV, and where you can lean on ICE platforms.”

As part of this full-electrification charge from Kia, we’ll likely see the brand’s EV7 or EV8 large SUV next year. Meanwhile, the EV4 could make its debut in 2022 or early the following year, with sales beginning later on in 2023.

What do you think of the EV4? Can Kia continue its hot streak of electric car products? Have your say in the comments…