The Chevrolet Corvette is one of the world’s most iconic car names and is synonymous with a naturally-aspirated V8 powertrain, but now the American firm is working towards a hybrid variant. We’ve caught the upcoming electric Corvette testing on German public roads.

The latest eighth-generation C8 Corvette has already caused plenty of controversy among Corvette enthusiasts due to its use of a mid-engined platform, where the American muscle car has been front-engined throughout its life. These latest spy shots show us the hybrid version is well underway, just as well considering we first saw it testing over two years ago.

We’re expecting the new hybrid Corvette to gain a new moniker too. Chevrolet trademarked the name ‘E-Ray’ back in 2015, which would suit this new electrified model. With Chevrolet’s parent company General Motors planning to go all-electric by 2035, the E-Ray name could also be reserved for a fully-electric Corvette. 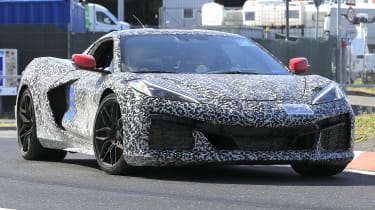 The C8 Corvette was launched with a 6.2-litre naturally aspirated V8 producing 495bhp and 637Nm torque and the upcoming Z06 model will use a 5.5-litre V8 with 670bhp and 624Nm of torque (which makes it the most powerful naturally-aspirated production engine in the world right now).

It’s unclear which engine the hybrid model will be paired with, but to avoid undermining the Z06’s position as the most powerful Corvette, the 6.2-litre V8 would be a better fit. As for the drivetrain, the hybrid system is likely to send power to the front axle only, creating the first all-wheel drive Corvette. A plug-in hybrid system is possible too, which could allow for electric-only range.

As for this spied prototype, enthusiasts should be reassured by the testing taking place at the Nurburgring, suggesting Chevrolet is still placing driver involvement as the number one priority. The front bumper looks to be a unique design for the hybrid and towards the rear we see the same quad-tailpipe set up as the Stingray model. The alloy wheels haven’t been seen on a Corvette model yet.

Judging by these images, we could see the hybrid Corvette going on sale shortly after it’s revealed next year.