In its 109-year history, Aston Martin has changed its badge seven times and now the British firm has just unveiled the eighth iteration of its logo. It doesn’t deviate too much from the outgoing version, but Aston Martin says it coincides with “a bold new creative brand strategy and global marketing campaign”.

The new badge is styled by British art director and graphic designer Peter Saville. The physical form is hand-crafted by jewellery artisans in Birmingham. It’s the first time since 2003 that the logo has been changed and to mark the occasion, Aston Martin showcased behind-the-scenes imagery of the 203-year-old silversmiths firm Vaughtons going through the process of creating the badge.

Aston Martin’s F1 team has been using the new badge already this season, but this weekend’s French Grand Prix will see their cars display the logo on a new livery. The race also ties in with the 100-year anniversary of Aston Martin entering its first Grand Prix. To honour this, the firm’s F1 cars will also feature the original Aston Martin logo on their noses. 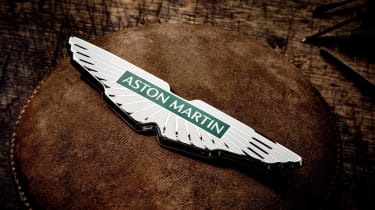 As for the road cars, we will see the new logo appear on the next-generation of sports cars and luxury cars according to Aston Martin, models that will “further enhance Aston Martin’s focus on ultra-luxury, performance and driving intensity”.

The badge also signifies a new ‘strategic repositioning’ for Aston Martin. Renato Bisignani, Head of Global Marketing and Communications at Aston Martin said: “Building on our return to the pinnacle of motorsport in Formula One, the launch of Intensity. Driven. marks the next phase in our evolution of the Aston Martin brand, as we unleash its global potential and maximise our unique position at the cutting-edge of ultra-luxury and high performance.”