​New all-electric Porsche SUV will be focused on luxury

The Taycan is currently Porsche’s only electric car, but we’re about to see an influx of electric SUVs from the German brand in the coming years. In 2024, the electric Macan will debut and now Porsche has claimed it will follow up with a larger, all-electric SUV.

Porsche’s Taycan now outsells the 911 and the firm is looking to build on the popularity of its first electric car. “We plan to add a new luxury, all-electric SUV model to our attractive portfolio. It will further expand our position in the luxury automotive segment,” a Porsche statement reads. The new EV has been internally codenamed ‘K1’ and will be a “’very sporty interpretation of an SUV,” Porsche CEO Oliver Blume said earlier this week.

The Volkswagen Group has invested heavily in its new PPE architecture, which will be first seen on the Audi Q6 e-tron and will form the basis of the new Macan EV. However, the new Porsche electric SUV will use the upcoming SSP platform instead, just like the next Taycan and Panamera. This means it could offer the largest battery capacity seen in an electric car from the VW Group. 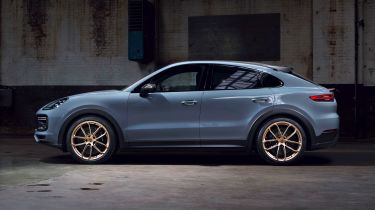 The Taycan Turbo S currently utilises a 93.4kWh battery, which was recently beaten by the Mercedes EQS and its 107.8kWh unit. The new car could sit as a flagship model above the next Cayenne (which will come on the PPE platform), so an even larger battery capacity could feature in Porsche’s new electric SUV.

That SUV body might also detract from potential range, however, especially in comparison to the sleek Taycan. The current Taycan 4S can reach up to 318 miles on a single charge (which will be improved further with the latest updates); even with the new SSP architecture, we expect this new car will only offer a slightly improved range. We could also see tech such as oil-cooled electric motors derived from the Mission R concept car, along with a 350kW charging capacity and 900-volt architecture.

Porsche has said the new car will be built on the production line at its Leipzig plant, where the current Panamera and Macan are made and also where the upcoming electric Macan will be produced. A full debut is still some years away however.

Now check out our review of the facelifted Porsche Macan here…