Renault’s electrified line-up has gained another vehicle in the form of the new Kangoo E-Tech. The French firm has announced pricing and specifications for both the internal-combustion engined Kangoo and the pure-electric Kangoo E-Tech, with orders open now and first deliveries expected by October.

The new Kangoo E-Tech shares the same underpinnings as the latest Mercedes Citan and provides a rival the electric versions of the Citroen Berlingo and Peugeot Partner. The Kangoo E-Tech gets a 45kWh battery pack (compared to the 50kWh battery in the Citroen and Peugeot), powering a 121bhp electric motor. However, maximum range is better than the Citroen e-Berlingo and Peugeot e-Partner at 186 miles. Regenerative braking with three set positions can be used, while there’s also an Eco drive mode designed for maximising range when the vehicle is carrying a light load.

When connected to a 75kW DC rapid charger, the battery can receive an 80 per cent charge in around 43 minutes. Recharging at a 22kW public charger from 15 to 80 per cent takes 1.5 hours while a full charge with a 7.4kW wallbox takes six hours.

The Renault Kangoo gets a choice of petrol and diesel engines, with the 99bhp TCe petrol engine sitting alongside the 94bhp dCi and 113bhp dCi diesel engines. The latter is offered exclusively with the seven-speed automatic transmission. 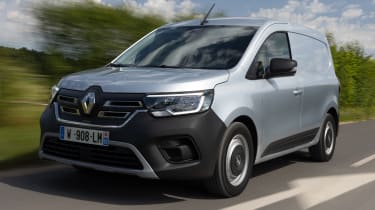 Both the Kangoo and Kangoo E-Tech come in two trim levels, ‘Start’ and ‘Advance’. As standard, the Kangoo comes with automatic headlights and wipers, a 3.5-inch TFT driver information display, DAB radio with Bluetooth and USB connectivity, electric front windows, manual air conditioning, heated and electrically-adjustable door mirrors, and a height-adjustable driver’s seat. Also standard are safety features such as hill start assist, emergency E-call, and cruise control with speed limiter. The E-Tech gets automatic air conditioning, a heated front windscreen, heated seats, and Z.E. Voice on top of this.

The Kangoo E-Tech electric is available with a choice of two wheelbase lengths. The load bay in the standard model has 3.9 cubic metres of space and a maximum payload of 600kg. The long wheelbase variant measures 4.9 cubic metres and can carry up to 800kg.

What does the new Renault Kangoo E-Tech electric van have to beat? Click here for our run-down of the best electric vans on sale now…