Seven-seat Hyundai Ioniq 7 to arrive in 2024

Hyundai is in the middle of expanding its electric car portfolio and its next EV to break cover will be a large SUV, called the Ioniq 7. It follows on from the Ioniq 5 and the recently announced Ioniq 6 in Hyundai’s bespoke electric range, and as a seven-seater it’ll rival the likes of Tesla’s Model X and the Mercedes EQB.

Hyundai has already set a date of 2024 for the Ioniq 7’s arrival, so it’s expected that the model could break cover either late this year or early in 2023.

Underpinning the Ioniq 7 will be Hyundai-Kia’s E-GMP scalable platform for electric cars, with the modular architecture’s width and wheelbase length left relatively free. With fewer constraints on these parameters, the size of the battery the large SUV needs to house will be a big determining factor.

For reference, the Ioniq 5 crossover’s wheelbase stands at 3,000mm, which is already 235mm longer than Hyundai’s own seven-seat SUV, the Santa Fe. However, for the Ioniq 7 this could be stretched further still to improve the amount of cabin space – and the space available to locate a bigger battery in the car’s floor, improving range for this large, bulky and no doubt heavy machine..

As a result it will likely accommodate a larger battery than the Ioniq 5 and 6, helping to offset the car’s extra weight compared with that of its mid-size sibling. This could offer up to 100kWh of energy, with a development in battery chemistry meaning Hyundai will advance to its fourth-generation technology by 2023, increasing energy density over current set-ups by between 10 and 20 per cent and giving the SUV a range of around 400 miles.

The E-GMP platform’s 800V electronic architecture will equip the Ioniq 7 with 350kW rapid-charge capability, meaning up to 62 miles of range can be added in only five minutes. Given the 7’s positioning as a flagship, though, it could also feature wireless charging. This is a possibility for E-GMP, with Hyundai’s head of Electrification Development Group, Chung Jin-Hwan, highlighting: “It’s in development; we have been resolving many issues that inherently arise with wireless charging.”

Regardless, it’s the platform’s clever use of space that will characterise the Ioniq 7, just as it does in its Ioniq 5 stablemate. The relatively slim battery also allows for a fully flat floor inside the cabin, and with the Ioniq 7’s SUV body delivering a higher seating position, the car should offer an incredible level of space and practicality.

As platform, battery and electric-motor tech become standardised across the line-ups of both Hyundai and sister brand Kia, with many future models to be underpinned by their E-GMP platform, interior design and use of space will increasingly define these different models. For the 7 expect a similar lounge-style treatment to the 5’s, with a greater focus on usability with a luxury edge. 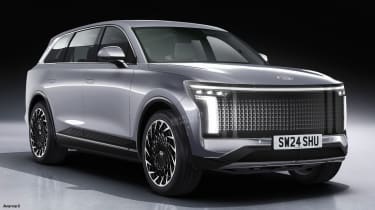 Given the Ioniq 7’s size, it’s likely that the SUV could use the dual-motor set-up from the Ioniq 5, which currently delivers up to 301bhp and 605Nm of torque, and 4WD capability. In the smaller crossover this is enough for a 5.2-second 0-62mph time, so the largest Ioniq model should still offer adequate performance.

However, this tech in sister brand Kia’s EV6 GT has been tuned to deliver up to 577bhp, so Hyundai could turn up the wick for the Ioniq 7. Many owners of large SUVs also use their cars for pulling trailers or caravans, and this tech should give the 7 a fair towing capacity regardless of power output; the Ioniq 5 can pull up to 1,600kg.

Given the proportions of the Ioniq 7 we’re unlikely to see a hot N variant in the style of the Ioniq 5 N and Ioniq 6 N, but our exclusive images preview how the new seven-seater from the Korean firm’s Ioniq sub-brand could look.

A previously released shadowy teaser image from Hyundai shows the Ioniq 5, Ioniq 6 and Ioniq 7 together, with the Ioniq 5 in the middle giving a sense of how the 6 and 7 models will differ in design and size.

The cabin will be packed with even more connected tech, too, because Hyundai is part of a deal that’ll see a new Nvidia Connected Drive software platform with over-the-air update capability fitted to its new cars from 2022. Expect more advanced autonomous driver-assistance systems as well.

The car’s exterior styling will be in keeping with that of the 5, with bold lines and strong surfaces, while the Ioniq sub-brand’s trademark LED light treatment will also be shared with the firm’s Prophecy concept, a car that gave us a preview of the new Ioniq 6 saloon.

As our exclusive preview images highlight, expect the Ioniq 7 to feature a full-width running-light bar at the front with Parametric Pixel LEDs below. The high bonnet and bluff front end will reinforce the 7’s halo status in the line-up, while with no combustion engine to accommodate, the area underneath the bonnet could offer significant storage capability, including for the car’s charging cables, to further free up boot space. Chunky surfacing down the flanks balances the big glasshouse and merges into a squared-off rear that also features a distinctive LED design.