In 1972 we first laid eyes on the Renault 5 and it went on to be an incredible success, with over five million examples of the first generation model finding homes. To celebrate the original half a century after its launch, Renault enrolled the talents of French designer Pierre Gonalons to create this new Renault 5 Diamant show car.

The proportions of the Diamant are instantly recognizable as those of a 5. The sharp, sloping rear hatch, semi-covered rear wheels and bluff front end are all traits that helped the Renault 5 gain and maintain popularity until the end of the second-generation model’s production run in 1996.

The Diamant has been given a thorough makeover, even the powertrain has been swapped out for an all-electric unit. There’s three-layer paint on the exterior, made up of golden pigments on a pink base with frosted varnish on top. The headlights, which Renault says are ‘gem-like’, protrude out from the bonnet.

At the side there are wider wheels taken from the hotter Alpine model, although they ditch the turbine design in favour of a simple black and white hub cap. New round door mirrors are finished in gold, as are the door handles and exterior window trim. The rear features the same large square hatch opening with ‘R5 Diamant’ wording on the tailgate. The rear lights also follow on from the front’s ‘gem-like’ design. 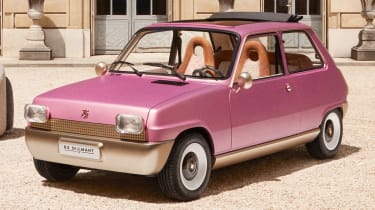 The most eye-catching feature inside the Diamant has to be the uniquely shaped steering wheel made from recycled marble. In front of the driver there are three dials showing speed, battery charge and time. Covering the dash is hand-woven horsehair fabric.

The Diamant showcases plenty of impressive tech, with a smartphone holder sitting in the middle of the dash and a fingerprint scanner to unlock the doors. Being a pure-electric car, it also has a three-position sequential shift lever.

The Diamant is just a concept car but an all-electric Renault 5 is coming with production of the R5 EV scheduled to begin in 2024.