Testing of the new Audi Q8 e-tron is ramping up and new spy images have given us our best look yet at the forthcoming model. The current e-tron name is set to bow out with the introduction of the Q8 e-tron nameplate in a major facelift.

Audi’s push towards a full-electric future started with the e-tron SUV – but since then we’ve seen the new BMW iX, Hyundai Ioniq 5, Kia EV6 and Tesla Model Y all eat into the electric SUV market.

Our spy shots show the new car won’t receive a dramatic change to the exterior. There will be redesigned front and rear bumpers to help deliver a more aerodynamic package overall. The headlights will also undergo a slight tweak but the Q8 e-tron shouldn’t be too strong a departure from the outgoing e-tron.

Given that the e-tron is being put under pressure, it’s not surprising Audi is launching a significant update in 2022. The new car, now called ‘Q8 e-tron’, will still be based on MLB evo, a converted combustion-engined platform. The compromises of this platform have been exposed, not only by competitors but also by the lower, sleeker e-tron GT four-door coupe, which sits on a bespoke electric architecture shared with the Porsche Taycan. The forthcoming Q6 e-tron SUV, which sits on the next-gen PPE platform, is also likely to have a significant advantage over its larger sibling.

However, Audi’s board member for technical development, Oliver Hoffman, has revealed to Auto Express earlier this year that the e-tron will get significant upgrades to its electrics and battery when it is facelifted in the second half of next year. “We are very clear: with Q6 e-tron we have B-segment [C-segment in the UK] while the e-tron is focusing on C-segment [D-segment to British customers],” Hoffman said. “The e-tron really is a special car for Audi because it was really the pioneer of electric mobility for us. 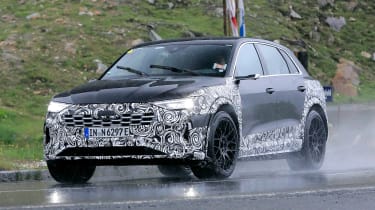 “So it’s important to keep the car fresh, and therefore we are developing a big update in terms of range and charging time.”

Hoffman declined to discuss specific figures, but the increased energy density could allow Audi to beef up the maximum battery capacity to more than 100kWh. This, combined with increased efficiency from its electric motors, could give the e-tron range comfortably north of its current maximum, 249 miles. A figure of more than 300 miles is almost certainly Audi’s target.

The updated e-tron isn’t likely to match the Q6 e-tron’s expected 350kW recharging speed – that’s based on 800-volt technology that isn’t stitched into the existing model’s platform – but Hoffman’s admission that charging speeds will also be updated would indicate that an increase from the current 150kW rate is part of the plan.

The updates will allow the e-tron and e-tron Sportback to continue on sale for a conventional seven-year life cycle, before they are replaced by cars based on the VW Group’s forthcoming SSP architecture. Audi CEO Markus Duesmann has confirmed production of the e-tron’s successor will commence in Brussels in 2026, and it will be called Q8 e-tron.

However, Auto Express understands that Audi will now use the significant facelift being lined up for the e-tron to introduce the name change earlier than first planned. Audi executives are keen to quickly align the rapidly growing e-tron line-up along the brand’s traditional numerical naming convention, according to reports in the German automotive media. The facelifted e-tron will take on the Q8 e-tron name, to end any potential confusion about the model’s positioning.

Check out the best electric cars you can buy right now…