Lamborghini’s V12 hypercars date back to the Miura of 1966 and the Italian firm has made sure each of the four models launched since have had a long lifespan – including the outgoing Aventador which was revealed in 2011. Now, it’s almost time for a new one and we’ve already caught it testing in prototype form.

The new car will undertake a drastic change from the Aventador in terms of its powertrain with the use of electrification. We’ve spied the new Lamborghini before on a private track but this is the first time we’ve seen it on the road. Like before, the classic wedge shape is prominent, with an angular nose, low roofline and long rear deck, but now the design details are bolder than ever.

The headlights have parts of the bonnet overlapping them to give an aggressive look and we can see air intakes on the bumper, channelling air to the front brakes. There are huge brake calipers behind the test rims and at the side we see two more intakes (just like the Aventador). The electrical warning sticker gives away the electrified powertrain.

Classic Lamborghini design traits such as pointed wing mirrors, a double-bubble roof and trapezoidal brake lights all feature on this test car. Lamborghini has been creative with the rear light camouflage however with the real lights sitting beside the high-mounted, quad exhaust tips. At the bottom there’s a huge diffuser which will work alongside an active rear spoiler. 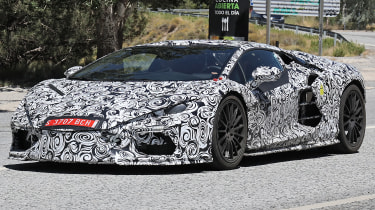 The company recently announced it would put the Aventador’s naturally aspirated 6.5-litre V12 engine out to pasture following production of the 769bhp LP 780-4 Ultimae special edition, marking the start of the brand’s ambition to launch a fully hybridised range of cars in 2024.

It was thought that Lamborghini’s push towards electrification could have ended the brand’s relationship with the V12 engine, bringing downsizing and turbocharging with it. However, Winkelmann has since confirmed that won’t be the case.

Lamborghini plans on going all-in on its electrification strategy, aiming to have at least a hybrid powertrain in all of its vehicles by 2024. By the end of the decade, we’re also due to see the brand’s first pure-electric vehicle.