Hyundai has teased its new Ioniq 6 N ahead of its scheduled reveal on 15 July as part of the firm’s ‘N Day’. It’s the first time we’ve seen an official reference to the sporty EV, and despite it being shrouded in smoke, there are a few key details to pick out.

From the image published on Hyundai’s social media channels, it’s only possible to see the rear of the car, which sports the same ‘Parametric’ pixel rear LEDs that make up the car’s light bar. It’s likely that the N model will ditch the upper spoiler, which integrates the third rear brake light, to make room for a gigantic rear wing mounted on the boot lid. It looks to be adjustable, while underneath there’s a slightly extended ducktail spoiler.

A short clip appeared online with the ‘N Day’ announcement, which included a switch between the exhaust note of an i30 N to an EV’s powertrain hum.

This is in keeping with Hyundai’s design boss, SangYup Lee, who had previously hinted at a sportier version of its new all-electric four-door. 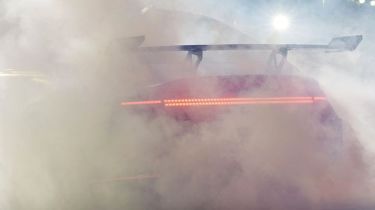 Asked whether he and his team had considered a hatch-style liftback for the Ioniq 6 – instead of the conventional saloon tailgate on the production car – chief designer Lee told Auto Express: “I can make a great hatchback out of that; a shooting brake,” suggesting that a more practical model is on the cards. Further to this, Lee said: “[Ioniq 6] would also make a great performance model”, all but confirming the arrival of an Ioniq 6 N.

We already know the Ioniq 5 will gain a hot N-badged variant in 2023 and the ‘N Day’ will also likely accommodate that car’s reveal, as well as the unveiling of an N concept car. The Ioniq 6 N could use a similar set-up to Kia’s EV6 GT, which is powered by a 77.4kWh battery supplying a pair of electric motors to deliver four-wheel drive and up to 600bhp. That should allow for 0-62mph of less than four seconds and a top speed of more than 160mph.

Finally, Lee hinted that more impactful design may mean future Hyundais could have a shorter overall lifespan, and that the conventional mid-life facelifts might focus more on substantial over-the-air updates rather than minor tweaks to the lights and bumpers as they do now: “Making a timeless EV makes lifecycle management much easier,” Lee said.