Our Defender is proving to be everything we hoped and expected it would be – an exceptional vehicle that’s multi-talented (although we’ve yet to take it off road) and proving to be very easy to live with. We’re looking forward to seeing how the PHEV system affects overall economy as well as company car rates, but there’s an awful lot to like so far.

The best things in life come to those who wait, and as with so many people these days who are waiting for their new cars, my Defender took a while to arrive. Delivery times are improving now, we’re told, but at least it allowed my excitement to build; the latest Land Rover Defender is one of those rare cars that is so good, I can remember when and where I was when I first drove one.

I wasn’t the only one excited by the new delivery. Friend, neighbour and local car dealer Jason Holt was keen to look around my new Defender, too. He runs CSG Motor Company in Chalfont St Giles, Bucks, and his pride and joy is an original Defender 130. Old and new Defenders are incomparable, other than in spirit. While Jason’s car is full of character and much loved, it’s full of frustrations, too – it’s an old design that was just left to soldier on.

The new car is a clever piece of design and engineering – and much sought after, as those waiting lists prove. Not only does it look fantastic, but the new model also includes the kind of smart engineering that made the old one so special. And so far, build quality – a traditional JLR Achilles’ heel – seems to be spot on. The new model, whisper it, isn’t even built in the UK; it comes out of a brand-new plant in Slovakia. I decided to plough my own furrow with the Defender and ordered the new plug-in hybrid version in Eiger Grey. The vast majority of Defenders you’ll see are in Santorini Black, but I reckon my car, with its dark X-Dynamic trimmings, looks fantastic.

The P400e combines a 2.0-litre four-cylinder engine and a 19.2kWh battery, which is supposed to give an electric running range of 27 miles. In practice that’s a pretty realistic figure, but as with all PHEVs, you have to plug in as often as you can to achieve decent fuel figures. So far, our 32.2mpg average is not far from what we’d expect from a diesel model – but it’ll probably improve as I do an increasing number of short trips on electricity alone.

A first trip on my regular jaunt from Buckinghamshire to Liverpool to watch the football probably didn’t help; nor did a short family holiday in Wales. Both saw the car’s electric power disappear pretty quickly and there were limited options to put another 27 miles-worth of range in the battery.

However, the comfort and quietness of the Defender made up for things; this is a seriously smooth long-distance cruiser. It’s difficult to tell whether you’re running on electric or petrol power, so good is the refinement. But when you do put your foot down, the four-cylinder engine sounds a bit fruity – more like there are five cylinders working away. And I’ve not yet felt short of power, despite the car’s size and weight.

There’s a fantastic view out – as there was in the old Defender – and there’s plenty of space for five adults and a dog on board. I also like the amount of thinking that’s gone into placing odds and ends around the cabin – something Land Rover has always been good at. My car even has a fridge inside – handy in the hot weather.

I also love the big, square 11.4-inch touchscreen. It’s quick and easy to use, although having activated Amazon Alexa on the infotainment system, I’m beginning to regret it. Mention anything that sounds even vaguely like the A-word and the system pauses, waiting for your next instruction. The only other minor frustration is that the charging cable and jack sit in bags in the boot, which is slightly raised, due to the hybrid system’s battery. It’d be nice if they could be tucked out of the way somewhere.

Other than that, the Defender has been well worth the wait – and will be if you’re currently waiting for yours. 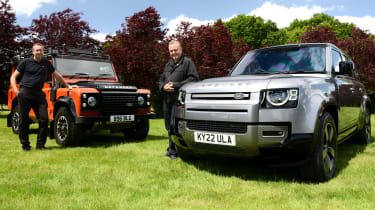