The Fiat Ducato has long been a popular choice in the large van sector, selling in big numbers across Europe in many shapes and sizes, whether it’s a traditional panel van, chassis cab or even as a popular base for a camper. The current Ducato is an evolution of what’s gone before, and was initially marketed as the Fiat Ducato 8, signifying its status as the eighth big update of Fiat’s large van.

This time around, Fiat has started with the previous Ducato’s frame and bodywork and added new running gear and technology that’s designed to bring it bang up to date, as well as make it more efficient. Something that hasn’t changed is the sheer variety of options on offer. Specifications and dimensions vary, but the basic Ducato panel van is available in three lengths, two wheelbases and three roof heights. In addition to this, Fiat offers a glazed van for carrying passengers, or there’s the Ducato Combi which adds a second row of seats, but still has cargo space behind. These two are also offered in a range of lengths and heights.

On top of that, Fiat offers the Ducato as a Chassis Cab with either Ready for Professionals factory-built bodywork, or a number of specialist UK converters work with Fiat to provide bespoke bodywork. These conversions range from tippers and dropsides to camper conversions and even ambulances.

Power comes from a choice of three 2.2-litre diesel engines. These are branded Multijet 3, and are third-generation Euro 6-compliant powerplants that offer improved efficiency, durability and refinement than the older Multijet 2 engines. Six-speed manual gearboxes are fitted across the range, while a new nine-speed auto sourced from gearbox specialist ZF is available with the more powerful engines. And if you want to cut your emissions, then the Fiat e-Ducato is the all-electric option.

Inside, the panel van offers seating for three, while the range of optional kit that’s available includes luxuries such as a digital instrument cluster and a large 10-inch touchscreen display, while Fiat offers packs that bundle specific pieces of kit together.

The Ducato has also introduced semi-autonomous driver aids to the large van sector. Kit such as adaptive cruise control with stop-start in traffic jams, lane departure warning and control, autonomous emergency braking with pedestrian detection, cross wind and trailer stability assist and speed limit detection are all on offer.

Rivals for the Fiat Ducato include the closely related Citroen Relay and Peugeot Boxer, although they use their own engines that aren’t as refined as the Fiat’s. Elsewhere, the Ford Transit is a class leader, especially in electrified E-Transit guise, while the Volkswagen Crafter, MAN TGE (a rebadged Crafter) and Mercedes Sprinter are all upmarket rivals. The Renault Master is another tough opponent that comes in light and heavy-duty guises like the Ducato. It’s also sold as the Nissan Interstar, previously known as the NV400.

The Fiat Ducato 8 features Fiat’s Multijet 3 diesel engine, which is designed to deliver incremental fuel economy savings over the previous generation Multijet 2. The 2.2-litre four-cylinder unit is lighter than the old unit and efficiency has improved by up to seven per cent. While that doesn’t sound like a big number, this will result in big savings for fleets and over a working van’s life.

All power outputs come with the Eco pack as standard, a system that was only optional on the previous generation. This adds fuel-saving stop-start, which activates when the manual Ducato is placed into neutral, while the auto-equipped model activates it when you come to a complete halt. If the engine is under heavy load (when the air-conditioning is activated, for example) then stop-start might not cut in.

The Multijet 3 complies with Euro 6D legislation, while Fiat offers heavy duty versions for vans with payloads in excess of 3.5 tonnes. The standard-fit six-speed manual gearbox offers improved flexibility, while refinement has been improved, too. While the Ducato isn’t car-like in cruising refinement, it’s not as tiring as it once was.

The new nine-speed auto gearbox is designed to optimise torque and improves efficiency, while moving into top gear boosts cruising refinement at higher speeds. Whichever van you choose, there’s a large fuel tank on offer, and you can expect a driving range of up to 700 miles on a tankful.

If you really want to cut running costs, then the Fiat e-Ducato offers electric running. It’s pricier to buy than the diesel van, but running costs are slashed. It offers a claimed range of up to 230 miles, too, which is among the best in the large electric van class.

Since the Ducato 8 is based on the same bodyshell as the previous model, cargo volumes and dimensions remain the same for the panel van. There is one slight change to the line-up, with the ditching of the L1 H1 low-roof option, so cargo volumes now range from 10 to 17 cubic metres.

Access to the load space is via a single sliding side door (a second door is available as an option) and double doors at the back. The side door leaves an opening of 1,075mm to 1,250mm, depending on which wheelbase is chosen, while the rear doors have an opening that’s 1,562mm wide, and they can open to 180 degrees. There’s a load step of 535mm to lift up to, which is higher than you’ll find in some rivals.

Payload weights are generous, and gross vehicle weights range from 2.8 tonnes to 4.25 tonnes, although the latter models can only be driven if you possess a C1 truck licence. 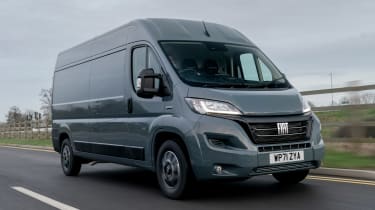 With tall roof options being the only ones available, there’s plenty of space to stand inside the Ducato’s cargo area, while grab handles help with getting in and out, too. Bright LED interior lights are available as an option, so you just have standard halogen lighting as standard.

Where the Ducato impresses is with the sheer variety of conversions on offer. Fiat offers a passenger carrying version, and a Ducato Combi that mixes passenger and cargo carrying, while Fiat’s Ready for Professionals range offers the Ducato Truck, which is an off-the-shelf conversion with single or double cab dropside or tipper bodies, or there’s a chassis version ready for bespoke conversion needs.

One area where the Fiat Ducato 8 has advanced is in terms of driver assistance tech. It takes kit from Fiat’s passenger cars to make the Ducato one of the safest large vans for sale in the UK. Fiat is proud to declare that the Ducato is the first large van to feature Level 2 autonomous driving assistance, although it’s offered as an option for those that want it.

There is a speed limiter and autonomous emergency braking, which will be a bonus for those vans used around town, offering an additional level of safety to help prevent injury to other road users, while also reducing repair costs from avoided collisions. Lane assist helps keep you on the right path, too.

Adaptive cruise control is also on offer, so you can set a speed for the Ducato and the van’s radar system will monitor the road ahead and adjust the van’s speed accordingly. This system is able to operate in slow-moving stop-start traffic, too, reducing the stresses of driving even further. This system is offered with the none-speed automatic gearbox.

Other safety highlights include a digital rear-view mirror. Again this is an option, but it means you can have a better view behind that would otherwise be redundant if you’re in a van with a bulkhead. It offers a clear view behind in all light and weather conditions, and also reduces glare at night when compared with a traditional glass mirror. You still get the standard twin door mirrors of course, with standard glass in the top, and a wide-angle mirror below, while there’s the option to have electrical adjustment for all four mirrors, too.

There are parking aids in the form of front and rear parking sensors, a reversing camera, while park assist for parallel or bay parking manoeuvres is also available.

The Ducato’s 2.2-litre Multijet 3 diesel is a strong performer that will be able to cope well with heavy payloads. It is still not the most refined diesel around, but it’s far from being harsh, while the six-speed gearbox has a reasonable shift to keep you going. Even better is the nine-speed auto, which changes gear smoothly and without fuss.

The Ducato’s tall driving position gives you a clear view of the road ahead, and those big mirrors help you with your surroundings, too. The assisted steering helps you to manoeuvre this big van in tight positions, while a decent amount of steering lock helps, too.

The ride is a little bouncy when the van has a lighter load on board, but this smooths out with bigger payloads, while the diesels deliver plenty of torque to cope with the extra weight.

The high-set cab is a step up to access, but there are grab handles to help you climb aboard. The driving position behind the wheel can be a little cramped for some, because the Ducato is designed to carry cargo rather than people, so the cab is pushed forward as far as possible, which can make legroom tight behind the wheel.

The three-seat layout is roomy enough across the cab, though, while storage is great. There are big door bins and plenty of dashtop storage, while the passenger seats flip up to reveal more hidden storage beneath. There are plenty of hard-wearing plastics in the cab that should hold up well to van life.

Fiat has thrown its car tech at the Ducato, but again most of it is offered as an option. This includes a digital dashboard that can be fully customised and offers clear information, while a 10-inch touchscreen infotainment system is the biggest option available.

This is a great system to use, with plenty of functionality and clear graphics. There is sat-nav included, which offers quick route mapping, but Apple CarPlay and Android Auto are also available so you can use your own smartphone for navigation.