BMW has got it pretty much spot on with its second-generation 2 Series Coupe. Keen drivers will be particularly impressed by the dynamic talents of the M240i performance model, but it’s as an overall package that the small coupe really stands out from its rivals.

The 2 Series Coupe offers plenty of driving fun, along with a surprising level of practicality, while its muscular styling gives it a real presence on the road. Entry-level petrol and diesel engines may not offer quite enough performance for some buyers, but that’s being picky as all models offer the same fantastic driving DNA.

Small combustion-engined coupes are becoming an increasing rarity in showrooms across the UK. With customer demand slowing and manufacturers turning their attention towards an electrified future, models such as BMW’s 2 Series Coupe are swimming in an ever-decreasing pool of rivals.

Despite the competition dwindling in number, those models left battling it out for small coupe supremacy are mostly premium challengers that offer bags of style and excellent driving dynamics. The Porsche 718 Cayman is a driving enthusiast’s dream, while the Alpine A110 is a more left-field choice, but both will give buyers considering a high-spec 2 Series Coupe model much to ponder.

The Toyota GR 86 is a more affordable sports car proposition that sits below its more powerful GR Supra sibling in the Japanese manufacturer’s lineup, while the stylish Audi TT is hard to overlook, particularly in performance S or RS form. For those seeking a little more space there’s even the Ford Mustang to consider, with the added appeal of its V8 soundtrack.

With front-wheel-drive Gran Coupe and Active Tourer models making up the rest of the 2 Series family, the Coupe stands out as the driver’s choice by retaining its rear-wheel-drive layout. Engine choices for the 2 Series Coupe are limited to a 2.0-litre, four-cylinder petrol unit available with either 181bhp (220i) or 242bhp (230i), and a 187bhp 2.0-litre diesel powerplant. 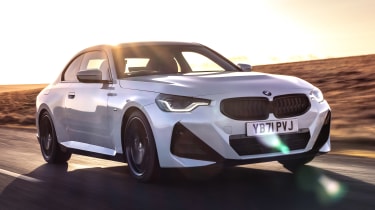 The standalone M240i model utilises BMW’s xDrive all-wheel-drive system to help distribute the 369bhp generated by its brawny 3.0-litre, six-cylinder petrol engine, while an eight-speed automatic transmission is standard across the range.

Most buyers of BMW coupe models are drawn to the ever-popular M Sport trim, with its bigger alloy wheels and stylish bodykit giving a taste of a bona-fide M model at a much smaller cost. The German manufacturer clearly thinks this is the way forward as M Sport is the only specification available for the second-generation 2 Series Coupe, with no SE or Sport trims on the price list.

For an alternative review of the BMW 2 Series Coupe, visit our sister site carbuyer.co.uk…