Ford Bronco to launch in Europe in 2023

The Ford Bronco SUV is coming to Europe next year – but only in left-hand-drive markets. Ford has announced that the reborn off-roader will be available in “strictly limited numbers” in selected European countries, including the likes of Germany and France, from late 2023.

Reintroduced in 2020 after a 25-year absence, the Bronco has proved hugely popular with American buyers. Indeed, it is believed that the limited supply to Europe is directly due to consistently high demand within the car’s home market. Ford has not issued any specific details on the specs and prices of the versions that will be offered in Europe – or revealed whether the more potent Bronco Raptor will feature in the range.

The decision fits with comments made last year to Auto Express by Ford’s global boss Jim Farley, who said he was “waiting for Ford of Europe to make up its mind” on importing the Bronco. However, while left-hand-drive Broncos are available in the UK through a third-party importer, there are no current plans for right-hand-drive production, let alone official UK sales. A spokesman said the firm would “evaluate the opportunity in the future”.

The Bronco can be bought in the UK, albeit not through the company’s official channels. Import specialist Clive Sutton has started shipping the retro off-roader over from the United States, offering it to UK customers in limited numbers.

Prices range between £45,000 and £85,000 depending on the specification of the car including all shipping costs, taxes and duties, putting the Bronco in roughly the same price bracket as the new Land Rover Defender.

In the United States, the Bronco is available with a choice of two turbocharged petrol engines. The entry-level model is powered by a 2.3-litre four-cylinder unit with 270bhp and 420Nm of torque, while the flagship variant features a 2.7-litre six-cylinder powertrain with 310bhp and 542Nm of torque. Clive Sutton is importing both versions.

Ford has also hinted that an all-electric full-size SUV that uses the Bronco as a starting point could be on the way. A Bronco Raptor, powered by a 395bhp 3.0-litre V6, has already been introduced.

Ford has previously said that it’s also considering bringing the Bronco over to Europe officially, but the decision is still wrapped up in red tape for the time being. Auto Express caught up with the company’s CEO, Jim Farley at the 2021 Goodwood Revival between stints at the wheel of his 1966 Ford GT40.

When asked whether we could expect to see the Bronco in Europe, he said with a smile on his face: “I’m just waiting for these guys [Ford of Europe] to make up their mind.”

Farley was convinced that the Bronco would sell well in Europe, too. He said: “Absolutely, it works. I see all these Defenders around – absolutely. I think it would work fine.”

The Bronco starts from around $30,000 in the US including taxes, although most buyers will spend much more, with myriad optional extras and option packs available. There’s no word on official European prices yet, but we’d expect a European Bronco to start at well over €30,000 depending on which specifications are offered.

Equally, with demand for Broncos so strong in its home market, it would be unlikely that the Bronco would come to Europe officially any time before 2023. 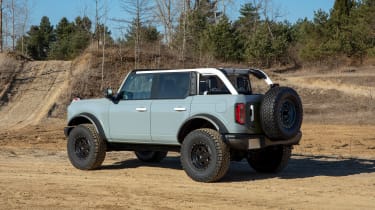 Like most purpose built off-roaders, the new Ford Bronco is based on a high-strength steel ladder chassis and it features a host of heavy-duty equipment, such as selectable four-wheel drive, a solid rear axle, locking front and rear differentials, extensive underbody protection and a two-speed transfer case.

There’s also a set of long-travel Bilstein suspension dampers, enormous 35-inch off-road tyres and a pair of semi-active anti-roll bars, which can be disconnected to allow greater wheel articulation when tackling tough terrain.

The Bronco also has 11.6 inches (almost 300mm) of ground clearance – more than the new Land Rover Defender – as well as breakover and departure angles of 29 degrees and 37.2 degrees respectively. Finally, Ford says its revamped off-roader has a class-leading wading depth of up to 33.5 inches (or 851mm).

Ford has also fitted this new model with a range of clever driver assistance technology, which the firm says will make off-road driving more manageable.

The Blue Oval’s Terrain Management System comes with a choice of seven driver profiles – four of which are geared towards off-road conditions. On top of the usual Normal, Eco and Sport modes, buyers also get Ford’s Sand, Baja, Mud/Ruts and Rock Crawl settings, each of which play with the Bronco’s diff locks and traction control to keep the car moving.

Ford also sells the Bronco with a choice of two transmissions, with buyers offered either a seven-speed manual or a 10-speed automatic gearbox.

The new Ford Bronco’s styling was heavily inspired by the firm’s first-generation model. The company’s engineers started the off-roader’s design process by 3D scanning the original model and working around its proportions, essentially rescaling its lines to meet modern safety and performance requirements.

It shares the same slab-sided, bluff-nosed design as its predecessor, albeit with a range of modern conveniences such as LED daytime running lights, improved material quality, more accommodating seats and Ford’s bang-up-to-date SYNC 4 infotainment technology. The infotainment system is available with either an eight or 12-inch screen and it’s coupled with a digital instrument cluster.

The off-roader is available in either two- or four-door body styles – and both options come with removable frameless doors and a range of modular body panels, including a removable hardtop, a stowable fabric soft-top and snap-in rear quarter light windows. Four-door models have four removable roof panels.

Ford has designed the Bronco’s interior to be hose-down – so, some models are available with interior drain holes, mildew resistant vinyl seats and washable rubber floor mats in place of carpets. The digital instrument binnacle and infotainment screen are also wipe-down, while the car’s switchgear is protected with silicone rubber to prevent water ingress.