The Vauxhall Crossland is a spacious, practical and economical family car that now offers loads more style and desirability thanks to a thorough overhaul in 2020. It can’t quite match the striking looks of its smaller Mokka sibling, but the practical Crossland has added a smart, sporty edge which will fit in well with modern family life.

Updates to Crossland’s steering and suspension set-up are welcome, as are some trim upgrades, but affordability will be uppermost in most customers minds and it’s here where the Crossland loses out to certain rivals on competitive finance deals.

The Crossland isn’t so much a bold 4×4, but more of a functional model aimed at young families with an active lifestyle. The larger Grandland SUV is also available in the Vauxhall lineup, taking on cars like the Volkswagen Tiguan and Mazda CX-5.

Vauxhall initially offered the Crossland with a variety of trims as well as personalisation options to tune the car to your tastes: SE was followed by SE Nav Premium, SRi Nav, Elite, Elite Nav and the top-of-the-range Ultimate Nav. It was a little confusing and the manufacturer has now neatened up the range with just Design, GS Line and Ultimate specifications on the price list. 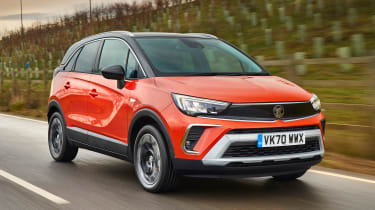 Buyers can choose from an entry-level 1.2 litre petrol engine, as well as two turbocharged petrol units and a diesel. As the Crossland is aimed mainly at retail customers, Vauxhall expects the turbo petrol engines to sell well – although the diesel’s excellent fuel economy will be tempting to some. Entry-level cars use a five-speed manual gearbox, with the range-topping turbo petrol coupled with a six-speed automatic transmission. All other cars utilise a six-speed manual ‘box.

All versions include 16-inch alloy wheels, a colour touchscreen with Bluetooth, Apple CarPlay and Android Auto, while higher-spec models add features such as bigger alloys, keyless entry, integrated sat-nav and heating for the front seats and steering wheel,

Rivals span far and wide, from the Citroen C3 Aircross on which the Crossland is based, to the venerable and hugely successful Nissan Juke. Other models you should consider in this market include the Renault Captur and SsangYong Tivoli, while bigger cars like the SEAT Ateca may also be within reach on a competitive PCP deal.

For an alternative review of the Vauxhall Crossland, visit our sister site carbuyer.co.uk…