The SEAT Arona is one of the leading offerings among a huge array of small SUVs currently on the market. It offers a composed and refined drive – albeit one that’s short on pure thrills or involvement – and SEAT’s decision to pitch it above the Ibiza means that all versions receive pretty generous standard equipment.

It’s not the most practical car in the class, but the 2021 facelifted model offers improved styling, cabin quality and tech so, overall, the Arona just about fits the brief as a small family car. It gives drivers the elevated driving position that makes small SUVs like this so appealing, while the engine range delivers a good mix of performance and economy.

The SEAT Arona went on sale in 2017, and is the smallest SUV in the Spanish car maker’s range. It slots in below the Ateca compact model and Tarraco seven-seater, and features the same sharp styling cues that are common across the SEAT range.

Under the skin, the Arona is based on the same running gear as the Ibiza supermini, and offers a bit more space thanks to its more upright body. Its small dimensions mean it’s a rival for cars such as the Citroen C3 Aircross, Hyundai Kona, Kia Stonic, Vauxhall Crossland, Peugeot 2008, Renault Captur and Nissan Juke.

Power for the core of the range comes from a 1.0 TSI petrol engine in either 94bhp or 108bhp form, plus a 1.5 TSI petrol unit producing 148bhp. The lower powered 1.0 TSI version has a five-speed manual gearbox as standard, while the 108bhp variant can be had with a six-speed manual or seven-speed DSG twin-clutch gearbox. The 1.5 TSI is only available with the seven-speed DSG transmission. All cars are front-wheel drive – there’s no option of the 4Drive 4×4 system found on the larger Ateca, and no special traction control as used on the C3 Aircross or Peugeot 2008.

SEAT offers a range of trims, kicking off with SE, then SE Technology, FR, FR Sport, Xperience and Xperience Lux. 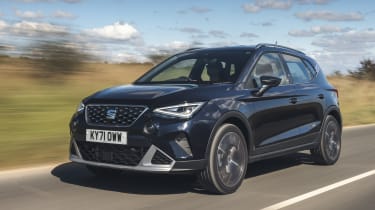 There’s plenty of personalisation on offer across the range, while FR cars get a sharper look and bigger wheels. Like most small SUV rivals, the Arona isn’t the sportiest car to drive, but it’s better than most, while the sprightly engines mean all cars feel responsive.

Overall, the Arona delivers more space than an Ibiza, while the looks are funky enough to stand out without compromising the car’s practicality. Prices for the range start at around £21,000, climbing to more than £27,000 for top-spec Xperience Lux versions.

For an alternative review of the SEAT Arona, visit our sister site carbuyer.co.uk…