The Fabia Monte Carlo’s sporty styling and high spec is icing on an already palatable cake; it’s still no hot hatchback, but there is a punchy powertrain offering and although it’s the range-topping Fabia it still looks good from a value perspective too.

These days you’re more likely to see Skoda making headlines for its SUV line-up than for its traditional saloon or hatch models, but the modern brand’s reputation owes much to the success of staples such as the Fabia supermini, which has routinely competed near the top of its segment since it first arrived back in 2009.

In the past there have been various iterations of the high-performance Fabia vRS hot hatch, but not for a while. Instead, it’s been the sporty but approachable feel of the Monte Carlo variant that’s arguably done more to raise aspirations amongst mainstream supermini buyers. The Monte Carlo name has undeniable cachet, even if you don’t know too much about Skoda’s historic triumphs on the local rally stages, or have no wish to relive them for yourself with a thrash along a favourite twisty lane. And that’s just as well, because to enjoy the latter activity properly you really need a hot hatch, and the Monte Carlo is no such model.

Think of it as the most snappily dressed trim level in the Fabia line-up though, with undeniably strong performance from the most powerful engine option available in a Fabia – and it’s an approachable and engaging car for drivers who take a more pragmatic approach to their driving.

Let’s address the looks first, and the first thing most observers will notice about this fourth-generation Fabia Monte Carlo is the black roof panel, which hopefully all buyers will specify because it’s an optional extra costing close to £300. We say hopefully, because it has been a constant feature of the Monte Carlo offer since the trim level arrived on the first Fabia in 2011, and it looks great – although it’s not quite a ‘trademark’ as many rivals offer similar contrasting roof treatments on their models these days.

Other bespoke elements of the Monte Carlo design package include uniquely styled bumpers at both ends of the car, and a range of black detailing including the grille surround, wing mirrors, and aerodynamic spoiler and side skirts. There’s a black diffuser-style rear apron, black lettering on the tailgate, and privacy glass to help complete a sporty makeover. Full LED headlamps are optional, but the £20,935 starting price does guarantee you a set of 17-inch gloss black alloy wheels, while inside the Monte Carlo treatment extends to a red horizontal trim line running across the dash, which is picked up in the door handles.

The seats get a sporty striped motif – those up front have a sporty ‘bucket’ feel – and there’s a black headlining. Parts of the door and dash get a racy carbon-fibre-effect finish, and shiny metal pedals and a leather-trimmed sports steering wheel complete the picture.

There are two engine options, kicking off with a 108bhp three-cylinder 1.0-litre TSI petrol which can be had with a six-speed manual gearbox or a seven-speed dual-clutch automatic transmission. We tried out the latter combo on a spectacularly hilly route in France – the Col de Turini rally stage, as you do – and it struggled up the point-and-shoot hairpins and steep inclines, which left the transmission floundering between ratios.

It’s likely the 1.0 TSI DSG would perform at least adequately under less arduous conditions such as the school run, but choosing to change gears manually might still be the more rewarding option. Hopefully a UK test drive soon will allow us to find out. 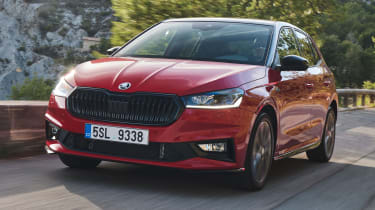 More power improves the Fabia’s demeanour no end, and stepping up to the 148bhp 1.5-litre TSI – which is only available with the DSG auto in the Monte Carlo – reveals the very grown up character a smaller engine doesn’t deliver. There’s plenty of torque to generate punchy acceleration from around 2,000rpm, and the DSG clearly works more effectively with the punchier, more potent engine.

The 0-62mph time of 8.0 secs and a 140mph maximum speed are impressive, but the relatively softly sprung Fabia doesn’t have the taut suspension set-up or – hopefully – feelsome steering of a decent hot hatch, so this isn’t a car for thrill seekers.

Incidentally, neither engine option comes with steering wheel-mounted shift paddles for the DSG, but we’re not yet sure whether that’s a tacit admission that this isn’t a car with sporting pretensions, or a means to help Skoda scrimp through the semiconductor shortage by using fewer parts.

Either way, you can change gear manually with the DSG shifter, if you have to, but the lever and its gate aren’t really configured to encourage frequent interaction.

The journey back from the Col de Turini to Nice, once out of the mountains, was much more akin to the work most drivers will put their Fabias to though, and this well-rounded supermini’s core strengths shine through on motorways and A-roads, and in traffic jams. It’s comfortable, roomy, quiet and well-appointed, and we wouldn’t have batted an eyelid if asked to steer north towards the UK on a 12-hour road trip instead of saying goodbye to the Monte Carlo at the airport.

Click here for the latest Skoda news and reviews…