This is the most appealing variant in the Qashqai line-up. Nissan’s e-Power tech has addressed our issues with the Qashqai’s lacklustre engine line-up, and while the car still falls short in some areas, the extra refinement, efficiency and performance e-Power brings seems worth the cash to us given the potential to recoup running costs. Not to mention the improved driving experience.

Despite a huge focus on its all-new Ariya SUV and full electrification in the future, Nissan knows that not all of its customers are ready to make the jump to an EV just yet. That’s why the brand has developed this intriguing and advanced e-Power powertrain for its bread and butter model in the UK, the Qashqai.

Think of e-Power as a kind of range extending hybrid and you’ll be somewhere close to the engineering concept that’s seen this tech find its way into Nissan’s most popular model. Adapted from a similar set-up in the Japanese market Note hatchback, much further development and tuning has gone on at Nissan’s technical centre in Cranfield, to make this tech more suitable for the brand’s European line-up.

As a result, e-Power uses a clever 1.5-litre three-cylinder turbocharged petrol engine with a variable compression ratio that can be altered to deliver maximum performance or maximum efficiency depending on driving conditions. However, the petrol engine never drives the wheels directly, instead charging a compact 2.1kWh lithium-ion battery or driving a generator that in turn feeds a front-mounted electric motor.

The result is a car that feels very much like an EV to drive in how it delivers its performance. With 187bhp and 300Nm from that e-motor, the Qashqai will complete the 0-62mph sprint in 7.9 seconds, but it’s the e-Power’s smoothness off the line, step-free acceleration from low speed and easily accessible performance that’s most impressive.

The mild-hybrid powertrains the car launched with last year are something of a weak link compared with rival models, but the e-Power set-up addresses a lot of those shortcomings.Refinement is strong too. Under normal conditions it’s not immediately apparent when the engine cuts in to generate electrical current. In fact, Nissan says the Qashqai e-Power spends 64 per cent of the WLTP test cycle with its engine off, resulting in claimed efficiency of up to 53.3mpg and 119g/km of CO2 emissions.

Even when you ask for maximum power, the engine doesn’t roar like some hybrid set-ups such as the latest Honda Civic, even if the clever 1.5 unit’s sound signature is more audible. This is down to Nissan’s “Linear Tune”, with the brand’s engineers calibrating the system in such a way that engine speed and what little noise you do hear rises with road speed as you accelerate, giving a greater connection to the powertrain and a more natural feeling.

Coupled with Nissan’s e-Pedal Step regenerative braking that means you can modulate your speed by just easing on and off the throttle, it’s a relaxing car to drive. Plus, with no transmission and therefore less vibration passed through to the cabin – and still offering more performance than any other Qashqai variant – refinement is good.

The steering is also a nice weight, with sufficient speed to its response and a chassis that can keep up delivering respectable driving dynamics; the Qashqai feels safe and composed rather than fun and engaging, but despite the e-Power set-up’s extra weight it’s agile enough for a car in this class. 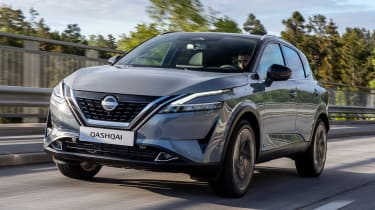 It also rides relatively well. Our Swedish test route was on mostly smooth tarmac, but lumps and bumps in the centre of Stockholm proved that despite the new engine option’s extra mass, the chassis still absorbs imperfections relatively well, delivering enough comfort.

This is where the third-generation Qashqai’s lightweight aluminium panels come in, helping save a total of 60kg in the body compared with the previous model, offsetting the new powertrain’s extra mass and helping maximise efficiency, too.

The brand calls the e-Power option a transition technology that’s bridging the gap between petrol and pure-EV, with claims that this could be the last car buyers might go for with a combustion engine before turning towards a fully electric model. The play is that once customers sample the characteristics of an EV-like drive – instant torque, refinement, lower running costs – they’ll be encouraged to make the switch.

However, as good as the engineering in the new powertrain is, the e-Power engine set-up can’t rectify many of the other areas that the Qashqai fell short in when it hit the market in 2021.

The on-board tech, for example, could still be better compared with the best family SUVs on sale; a Kia Sportage offers sharper graphics, faster responses to inputs and a more intuitive interface.

Neither is the boot the biggest, at 504 litres. But it’s also far from the smallest in this sector, and at least clever practicality points such as the 85-degree-wide opening rear doors remain, meaning it should be easy to strap small children into their seats.

At least the Qashqai gets plenty of kit, underscoring Nissan’s transition towards a brand known for value rather than volume.

N-Connecta will be the most popular trim option, priced from £35,120, and features a pair of 12.3-inch displays with Apple CarPlay and Android Auto, Nissan’s Around View monitor, lots of safety kit and all-round parking sensors. It’s the pick of the e-Power line-up.