The Ariya is a great leap in the right direction for Nissan. It’s more premium-feeling than anything we’ve yet seen from the brand, and it backs this up with some great engineering and technology underneath the stylish body. Performance and refinement are impressive, as is the Ariya’s range from even the smaller battery model. Individual touches inside and plenty of functional features combined with interesting design and materials make it an appealing choice that proves Nissan’s electrification push is really gathering pace.

Nissan is an electric pioneer. The brand beat its mainstream rivals to market with the Leaf electric car that it launched way over a decade ago – but despite this head start, the Ariya is only Nissan’s second-ever full EV for Europe.

Luckily – spoiler alert – it’s a good one. Whereas the Volkswagen ID.4 feels like it’s been rushed through to market in places, the Ariya is more convincing. Underneath the svelte, almost coupe-SUV-style body sits the Renault-Nissan Alliance CMF-EV platform – the same technical basis as the French brand’s Megane E-Tech Electric family crossover.

The Ariya is bigger, however, at 4,595mm long and with a 2,775mm wheelbase. Its battery options are also different as the Nissan range kicks off with a 63kWh (usable) option that, mated to a 215bhp electric motor driving the front wheels, serves up a claimed 250 miles of range. Our test returned 3.6 miles per kWh, which means the Ariya should easily deliver a real-world 225 miles from a full charge without any concessions towards eco-focused driving, which is impressive.

When the battery is nearly empty, 130kW rapid charging means a 20 to 80 per cent top-up will take a sector-standard 28 minutes, while overnight charges at home will take around 10 hours.

More important to the performance is the motor’s 300Nm of torque, and as with any EV, it’s available pretty much instantly. It means the 0-62mph sprint takes 7.5 seconds, which is far faster than combustion-engined cars of a similar size, but the big benefit is the ease of acceleration and how relaxed this makes the Ariya feel on the move.

Opt for the larger 87kWh battery option and you have a choice of 239bhp single-motor and 302bhp dual-motor e-4ORCE powertrains too, with the latter offering a 5.7-second 0-62mph time.

In our lower-powered front-wheel-drive test car there’s very little motor whine when cruising and it only becomes apparent when you ask for everything. This level of refinement extends to the car’s ride as well. There’s a taut edge to the Ariya’s suspension set-up and the body control feels relatively good, although our test route wasn’t the twistiest.

The drive was representative of how this car will be used by owners, however – commuting, school runs, urban and suburban driving – and the Ariya dealt with bumps fluidly, offering compliance over bad ridges, grids and road repairs to deliver a good level of comfort.

We’ll have to wait for a full UK test to assess its dynamic performance properly, but on some smooth Swedish forest roads the steering felt direct and offered a nice weight in the Standard drive mode, which felt well-matched to the other controls; there’s also a Sport setting that adds more heft and sharpens up throttle response, but it’s not really needed.

Nissan’s familiar e-Pedal set-up from the Leaf makes a return for the Ariya, this time branded as e-Pedal Step. Here, it means the car won’t come to a halt completely on its own, but the level of regeneration is enough to blend in and out of the throttle during normal town or country road driving so you rarely have to touch the brakes, again contributing towards the Ariya’s easy-going, stress-free feel. 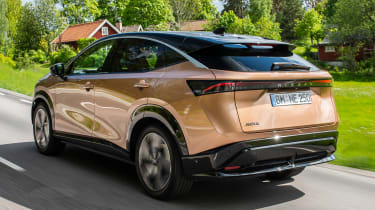 Some rivals offer more configurability when it comes to their regen settings, and maybe another mode in the Ariya would be nice, but the fact that the system is well calibrated and easy to get to grips with is more important.

It’s a different type of driving enjoyment, but the Ariya shows that with some adaptation of your approach and mindset, there’s still a rewarding driving experience to be had from a full EV like this, thanks to the easily accessible performance, the refinement and the levels of relaxation.

There is much more to the Ariya than how it drives and its functional factors, however. Nissan is pushing in a premium direction and is proud of its Japanese heritage, so inside the cabin the car features Japanese Andon-style lighting to give the effect of a traditional paper lantern. It’s a nice touch that lifts the interior and gives an individual feel in a crowded class.

Coupled with a smart wood-like trim inlay that cleverly houses the separate haptic climate controls (which work well), the interior is a delight. It feels much more special than cars such as the Volkswagen ID.4 and Toyota bZ4X – and compared with those rivals’ set-ups the pair of 12.3-inch screens could offer slightly sharper graphics. The functionality is also good, even if the response to touch inputs could be a little swifter still.

Sat-nav, Apple CarPlay and Android Auto connectivity plus Alexa integration, and functions to thermally condition the battery for the most effective recharging all feature. There’s a clever route planner that can select the most energy efficient route and suggest charging stops along your journey.

There’s plenty of space in the back; the car’s battery is 33 per cent slimmer than a Leaf’s, which means the floor is relatively low, helping deliver a good level of legroom. Despite the sleek roofline, headroom is good too.

With the centre console slid back the front of the cabin offers plenty of room, while there’s also an electrically operated compartment that emerges from the lower section of the dash, offering secure storage. A moveable lid on this compartment means there’s a place to prop up a device to watch if you’ll be waiting at a charging point, highlighting that Nissan has really thought about how buyers will use the car.

Boot space stands at 466 litres for the two-wheel drive model, which is ample, and the depth and width mean the Ariya will swallow a buggy or a golf bag on the angle no problem.

It’s this mix of strong performances in every area where a new car – and an all-new EV – needs to score highly that makes the Ariya such an appealing proposition. Revolutionary new electric cars are few and far between these days, but as a successful evolution of the formula, Nissan’s first next-generation model is a convincing line in the sand for the Japanese brand.