Electrification is coming to the Vauxhall Astra with the new eighth-generation model receiving an all-electric Astra-e variant from next year. It’ll follow the introduction of the plug-in hybrid variant version, hitting the roads in 2023.

Vauxhall plans on having an electrified version edition of every model by 2024, with the Vauxhall range to be fully electric from 2028. The firm already has electric cars in the shape of the Corsa-e and the Mokka-e and they’ll be joined by the Astra-e as a hatchback and a Sports Tourer estate.

Technical details on the Astra-e remain light. Stellantis has developed a new electric-specific STLA Medium platform, suitable for C and D-Segment vehicles, so think family hatchbacks like the Astra and larger SUVs like the Vauxhall Grandland.

The platform is the Stellantis branded version of the eVMP platform, which was being developed by PSA back when it was a standalone company. It is, in effect, a further development of the EMP2 platform that sits underneath the new Astra in petrol, diesel and plug-in hybrid format. 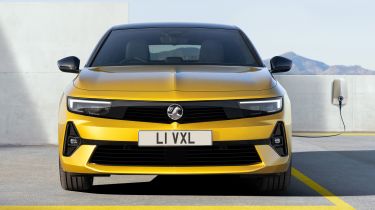 It all means that despite being on a platform with a different name, there will be some mechanical similarities between the combustion engined and fully-electric versions of the Astra, and if the STLA Medium/eVMP system works in the same way as the e-CMP platform for smaller cars, it will run down the same production line as vehicles on EMP2 as well.

Battery packs between 60kWh and 100kWh in capacity were initially touted for the eVMP system when it was a pure PSA project. Since it has been incorporated into Stellantis as the STLA Medium, the group has promised that the platform will deliver EVs capable of up to 434 miles on a single charge, more or less tallying with the 100kWh maximum capacity previously confirmed by PSA.

We expect Astra-e’s battery pack will be the same as the upcoming Peugeot e-308 EV, given the 308 and Astra already share the same powertrains. This means a 54kWh battery and 154bhp electric motor. Peugeot claims the e-308 will offer over 250 miles of range – expect a similar amount from the Astra-e.

If the Astra-e model follows the design convention set out by the Corsa-e and Mokka-e, there will be minimal difference in the way the Astra-e looks in comparison with its combustion engined siblings. A few key identifiers, such as a charging flap, distinct alloy wheels and paint options, may be the only real source of differentiation.

Check out our review of the new Vauxhall Astra here…