Adding to its growing all-electric offerings, Citroen has revealed a new model intended to fuse the practical and affordable family-friendly, all-electric e-C4 with a bit of flagship stardust from the new C5 X. The end result is the Citroen e-C4 X, which will be heading to Britain by the end of the year.

Built on the brand’s e-CMP platform, petrol and diesel versions of the newcomer will also be produced. But in Britain, we’ll only get the EV, which will start from around £35,000 when order books open – sales commence in November at the earliest before deliveries in the first quarter of 2023.

The brand describes the e-C4 X as a ‘cross-design’ that’s an alternative to conventional family hatchbacks and SUVs, essentially integrating a fastback saloon body into the raised hatchback design of the e-C4. It’s not too dissimilar to a new model from sister brand Peugeot, the 408, but the Citroen sits on a different platform.

The front end of the car is taken directly from the e-C4. In fact, the car is exactly the same up to the B-pillar, after which the new roofline and rear end take over. The wheelbase is the exact same as the e-C4 hatchback, at 2,670mm, but at 4,600mm in length it’s 240mm longer – the entire stretch is added to the rear overhang, where a larger boot is found.

Citroen’s designers have avoided giving the e-C4 X a hatchback boot lid and it instead has a proper saloon-style opening. The extra length of the rear overhang means that up to 510 litres of space are found with the rear seats in place – someway up on the 380 litres found in the e-C4 – while it’s just over a metre wide and a metre long, so there are certainly practicality gains for the fastback model compared with its hatch sibling.

The new rear end is also equipped with new LED rear lights, designed to look like arrows pointing inwards to the centre of the bootlid. A small ducktail-like spoiler gives the car a sporty touch, while the rear bumper is also newly designed especially for the e-C4 X. 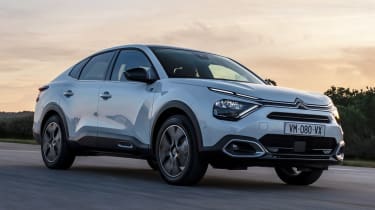 Inside, the interior is almost exactly the same as the regular e-C4, save for some slightly different dimensions in the rear – the lower roofline changing the amount of headroom on offer. Citroen’s Advanced Comfort Seats are standard, using a special thickened foam.

However, while the appearance of the dashboard is all but identical, with a compact digital instrument display behind the steering wheel and a 10-inch touchscreen infotainment system placed centrally, the infotainment software is new. It’s taken from the more upmarket C5 X, enabling full personalisation of the system by way of customisable widgets and more.

The battery-electric version of the newcomer is the only variant that will go on sale in Britain, along with a handful of other European markets. Using the well-known e-CMP platform, a 50kWh battery teams up with a 134bhp/260Nm electric motor, driving the front wheels. Citroen claims a range of 224 miles for the e-C4 X, and 0-62mph in 9.7 seconds, with a top speed of 93mph. Charging is handled at up to 100kW, enabling a 0-80 per cent recharge in around half an hour. From a 7.4kW wallbox it will take around 7.5 hours to recharge the e-C4 X, while 11kW three-phase charging compatibility will be optional.

In other markets, the range of petrol and diesel engines consists of PureTech 100 and 130 1.2-litre three-cylinder turbocharged units with manual or automatic transmission, plus a BlueHDi 1.5-litre four-cylinder diesel.