We’ve already run down the top 75 new cars to own in the Driver Power New Car Survey 2022, but the incredibly comprehensive data behind that survey doesn’t just give us insight into the UK’s favourite car models, though. We can also see which brands you favour the most.

As such, we’ve put together the Driver Power Brands Survey 2022, detailing the top 29 car makes as voted by you. These brands have been judged on the same categories their cars were. What’s more, some manufacturers whose cars didn’t sell in large enough numbers to qualify for individual model entries in the New Car Survey do make it into the Brands Survey, shaking up the competition a bit.

We recognise that car buyers often shop across sectors, so if you’re in the market for a new model and want to focus on one or two showrooms, this survey should help you choose which names to consider.

Read on to find out the top ten best car manufacturers in 2022, while further below you can view the full table of the top 29…

For the second year running, it’s Porsche that tops the Driver Power Brands Survey. Although none of the German sports car manufacturer’s individual models is plentiful enough to make it into the Driver Power New Car Survey, the data shows owners are extremely happy.

As you might expect, Porsche scores very highly in the majority of categories. It comes first for exterior, ride and handling, reliability and infotainment. A few highlighted areas within these categories that owners really rave about include exterior styling and finish, steering and braking responsiveness, ride quality, road handling, driving pleasure, overall build quality, and controls for the satellite navigation, heating and air-conditioning.

Unsurprisingly, Porsche also scores very well for its legendary engines and gearboxes, particularly acceleration and transmission smoothness. There are some complaints about running costs – Porsches are expensive to service, insure and tax, you tell us – but fuel economy isn’t as bad as might be anticipated. Value for money, meanwhile, doesn’t get absolutely slated in the survey, but there’s no getting around the fact that Porsches are expensive cars to buy.

Boot space gets a strong rating – most likely due to the existence of the Panamera, Taycan, Macan and Cayenne rather than the Boxster, Cayman and 911 – and owners think Porsches have versatile seating. There are a decent number of cubbyholes, but more child-friendly features would be welcome.

Overall, however, the brand paints a very strong picture, and it is a worthy winner for 2022.

Whether you meet them in person or via social media, it’s rare to find a Tesla owner who’s not deeply satisfied with their choice of car – and that’s borne out by the results of our Brands Survey, in which Tesla romps into second place.

The power and smooth delivery of the electric drivetrains net the top survey rating in the engine and gearbox category, and Tesla matches that feat with wins for both MPG and running costs, as well as for its safety features.

With third places for infotainment and practicality, as well as top-10 scores for ride and handling plus the interior, it’s only styling, reliability and value where owners seem relatively unimpressed by their cars.

Our survey respondents have voted their Teslas 27th out of 29 brands surveyed when it comes to exterior styling, while ratings of 19th for reliability and 22nd for value highlight the manufacturer’s other weak spots.

As the outright winner of the Driver Power New Car Survey 2022 with its highly feted XCeed, it’s no surprise to find Kia on the third step of the brand-satisfaction survey.

That said, there’s no outright category win for the firm here, but a trio of second places for MPG and running costs, brand reliability, and infotainment sets the scene for a set of results that doesn’t drop out of the top 10 anywhere.

In fact, the worst result that Kia can manage is an eighth place in the engine and gearbox category, followed by sixth for value, fifth for safety features and exterior design, and fourth for both practicality plus ride and handling. A third place for the interior attributes rounds off the results for the manufacturer, which deserves much credit for creating a range of mainstream products that owners find nearly as satisfying as aficionados of luxury enthusiast brands such as Porsche and Tesla.

There’s a lot to like about the latest Peugeot line-up, and owners seem to be especially enamoured of the way their cars look and drive. The brand’s highest category score is a second place for ride and handling, while it also scoops third place for the most satisfying powertrains – and another third for exterior design and finish. Running costs get the owner seal of approval, too, with a seventh in the category, which is matched by similar results across the interior and reliability categories.

Peugeot can’t quite equal Kia’s full house of top-10 results, but it’s not far adrift, scoring a pair of 11th places for its safety features and infotainment systems, and a still-decent 13th place for value, even as the brand’s worst category.

Digging deeper into the infotainment data reveals owners do like their entertainment systems and built-in sat-navs, but they’ve marked down the heating/air-con and user-friendliness of controls.

The Honda brand remains a solid contender in the ‘most satisfying’ stakes, having improved on last year’s sixth position by one place.

Practicality and boot space are the most highly regarded characteristics this year, which won’t come as a surprise to anyone accustomed to the brand’s rear Magic Seat arrangement, which give its cars unusually flexible cargo options. 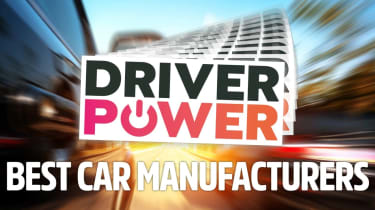 A third place shows Honda’s reliability is also prized, while a next-best of sixth for MPG and running costs, and 10th for value for money, complete a picture of practicality and affordability. The brand’s worst-performing category is a 15th place for infotainment; the visibility and sensitivity of displays, and balance of touchscreen and physical controls, score near the bottom of the table.

The heating and air-con, built-in sat-nav and audio system are ranked as merely average, but Hondas make 10th place for their ride and handling, and ninth for safety features.

If Jaguar seems to have temporarily lost its way in terms of product planning and new model launches, at least its customers are feeling upbeat and satisfied with the ownership experience.

Indeed, a little more so than last year, when the Big Cat posted a seventh place in our Driver Power Brands Survey. Top traits are ride and handling, where the Brit marque comes third, and powertrains, where it delivers a respectable fifth place.

Safety features are rated in a creditable fourth place overall, while Jaguar’s infotainment system – much maligned only a few years back – is now ranked eighth, along with the cars’ exterior style and finish. All that will be comforting to bosses as they plot out the brand’s future, but the same can’t be said about the owner ratings for value for money, where Jaguar limps to 26th place.

MPG and running costs aren’t much appreciated, either, it seems, with an overall 20th ranking on that front.

This is far from a bad result for Mazda, but it’s not as good as the fourth place scored by the brand in last year’s survey.

In 2022, an unexpectedly low 20th ranking for practicality and boot space helps to spoil Mazda’s chances of a higher finish. A deeper look into the data shows little love for child-friendly features or the available luggage space. The next-worst scores are 13th for MPG and running costs, and 12th for powertrains.

The Japanese brand scores top-10 results in the remaining seven out of our 10 categories, with reliability and infotainment both rating highest in fifth place, followed by a seventh for both value and the way the cars look, eighth for safety features and ninth for both the ride and handling section and interiors.

Things Mazda owners like the most include the user-friendliness of controls, smartphone connectivity and the audio system. All these earn top-three ratings in our survey.

Volvo has improved its performance by one place overall this year, and as you might predict of a brand noted for its roomy load-carriers, practicality and boot space is one of the categories in which it tops the chart.

Owners love the interior design and finish, too, which is the other category where Volvo sees off all rivals. Satisfaction levels are also extremely high for safety features – another iconic Volvo brand value – and exterior design.

But while buyers appreciate their cars’ understated Scandinavian chic, they’re far less satisfied with MPG and running costs, where the brand ranks close to the bottom. The overall value is rated in the lowest third, too, and customers don’t seem to like the engine and gearbox set-ups: acceleration scores are average, yet Volvos are ranked low for engine sound and gearbox smoothness.

In categories such as reliability, and ride and handling, the brand’s performance is middle of the road.

MINI management will be celebrating this result, after buyers bumped up the brand from 19th place in 2021. There aren’t any outstanding performances, but a set of mostly average ratings across the board suggests a broadly satisfied clientele.

The brand scores top-10 results for exterior design, safety features, reliability and its infotainment set-ups, while ride and handling is ranked just outside the top 10, along with interior aspects.

Satisfaction with practicality and boot space across the brand is only average, as it is with value. There are also low ratings in the MPG and running costs category, with owners relatively grumpy about the cost of servicing and their cars’ thirst for fuel.

The MINI brand’s sporty aspirations are reflected in a strong sixth place for driving pleasure, but perhaps called into question by a bottom-10 ranking for powertrains, and in particular by poor ratings for gearbox smoothness.

The final place in the 2022 top 10 goes to Toyota, which has disappointingly slipped five places from its 2021 result.

True to form, there are strong numbers in both the MPG and running costs, and reliability categories, but a set of very low scores for practicality lets the side down somewhat. Buyers rate the brand near the bottom of the survey for boot capacity and the availability of storage spaces, suggesting that there have been some evident trade-offs for the funky designs in the line-up these days.

Still, customers do seem to like the way their Toyotas look, with a ninth overall in the exterior category suggesting they don’t mind a bit of compromise. Interiors aren’t rated as highly, with only average scores, but the Toyota brand gets a decent seventh for its ride and handling, with owners offering positive feedback on the responsiveness of steering and brakes. The firm also comes 11th for overall driving pleasure.

You can get all of the Driver Power 2022 results here. Don’t buy your new car without checking them…