BMW’s X6 is undergoing a mid-life refresh for 2023 and following closely will be the sporty X6 M variant. We expect the new X6 M to receive plenty of tweaks to keep up with rivals such as the Mercedes GLE 63 and Audi RS Q8.

We’ve seen the upcoming facelift BMW X6 testing before, but this is our first look at the newly revised X6 M. From the outside we can see the X6 M will borrow styling cues from the regular X6, including a thinner set of headlights in keeping with BMW’s current design language. The lower bumper will also be changed and while the outline of the grille remains the same, the grille’s its insert will likely differ. The lack of camouflage elsewhere hints that the rest of the facelifted X6 M won’t change visually – aside from a new design of wheels.

Underneath the new car we could see similarly small tweaks. The outgoing X6 M produces 616bhp and 750Nm of torque from a 4.4-litre V8. This power is sent through an eight-speed automatic transmission to a rear-biased all-wheel-drive system, providing the SUV with a 0–62mph time of 3.8 seconds and an electronically limited top speed of 155mph. The new car could potentially borrow the engine version sitting in the new M5 CS, bumping power up to 626bhp. It’s not likely we’ll see the BMW XM’s 644bhp plug-in hybrid powertrain make its way over to the X6 M, given there’s no PHEV variant of the standard X6. 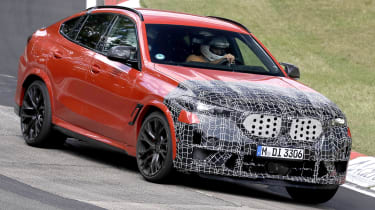 Inside the new X6 M, we’ll see the biggest changes, with the adoption of BMW’s latest iDrive 8 infotainment system. We first saw it on the iX SUV and the new 7 Series and it’s starting to appear in the rest of the BMW model lineup.

The system will be made up of a single curved display panel of the top of the dash, utilising a 12.3-inch digital instrument panel and a main 14.9-inch central touchscreen – which will be operated by a rotary dial on the centre console. Don’t expect the iX’s crystal dial design to feature on the new X6 M, however. The upgrade will also enable 5G connectivity, improved voice control and augmented reality navigation, along with BMW’s ‘My Modes’ feature.

Pricing for the current X6 M starts from £121,620 and we expect the facelifted model to receive a price increase, but sit below the upcoming BMW XM.

Now check out our list of the best hybrid SUVs here…